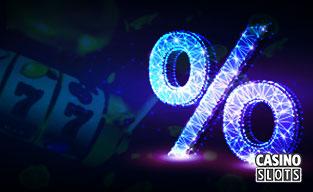 Slots that pay back to players 100% of all staked money – is that even possible? Well, the sky’s the limit when it comes to the wondrous world of fruit machines, you just need to be in the right place at the right time!

Here at CasinoSlots, we spare no effort to bring you the latest and most exclusive promotions as soon as we get them. This particular offer is not an exception and we hasten to share with you the details: the 100% RTP campaign runs for the full month of November, giving each new player to enjoy his or her favorite games with 100% RTP for 10 minutes a day for the whole 10 days!

Get ready for spinning the reels of the most sought-after slots created by Play n’ Go, GameArt, Yggdrasil, Pragmatic Play, and Push Gaming. The full list of available for this promo titles goes like this: Book of Dead, Reactoonz, Reactoonz 2, Rise of Merlin, Rich Wilde & the Tome of Madness, Honey Rush, Legacy of Dead, The Sword & The Grail, Moon Princess, Money Farm, Dragon King, Dragon Whisperer,
Jammin Jars, Vikings Go Berzerk, and Wolf Gold. Let’s have a closer look at them! 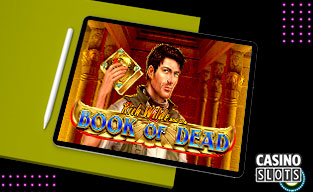 Launched in 2016, Book of Dead remains one of the most popular slots across online casinos. It’s hard to find a punter who hasn’t joined daring adventurer Rich Wilde on his search for the infamous funerary text at least in demo mode. This 5-reel 10-pay line thriller dedicated to the untold treasures of ancient Egypt comes with bunches of free spins, special expanding symbols, and a max win of 25,000 coins.

Developed by Pragmatic Play to show the world amazing landscapes and fascinating wildlife, Wolf Gold would be worth spinning just for the theme itself. However, the creators of this 25-line game didn’t want players to settle for striking visuals alone and spiced it up with a hefty assortment of bonus features: giant symbols, stacked wilds, and advantageous Money respins. This beautiful story is also enhanced with Mini, Major, and Mega Jackpots!

Hilarious aliens are the main characters of futuristic Reactoonz, which is everything but not an ordinary slot. Its unusual 7x7 grid has enough space for truly impressive wins and innovative extras with such imposing names as Quantum Leap, Implosion, Demolition, or Alteration. You will love insatiable Gargantoon, an uproarious 3x3 source of advantageous dropping wilds.

If you are one of those who prefer smaller yet frequent wins of low volatility slots, consider giving a spin to 50-line Dragon King. The wisdom of a mighty dragon will help you on your journey towards untold riches that come in the form of bonus rounds. Free treats on the house can be retriggered to double your wins.

A triumphant return of Reactoonz is boosted by a staggering max win of €508,300 (5083x total bet) and Quantumeter that is charged with Electric Wilds and unleashes 3x3 Gargantoon Wilds. In fact, Reactoonz 2 is stuffed with one-eyed and two-eyed characters able to work miracles by adding multipliers and creating huge winning clusters. Frankly speaking, it’s one of those games which is much easier to try and see for yourself then explain in words, all the more so all the incredible transformations leave a strong impression.

Jam-packed with sweet wins, 8x8 Jammin’ Jars is not an ordinary fruit-themed slot but rather a spectacular dancefloor chock-full of massive multipliers and exciting wins. Look for the colorful rainbow to appear on the reels because it’s in charge of juicy rewards, and be ready to enter bravely the free spins feature triggered by 3 Jam Jars.

Many punters who haven’t played this slot yet mistakenly think that it is a follow-up to Book of Dead, but Legacy of Dead is an absolutely unique story. The only thing they have in common is that both games are themed around the wealth and prosperity of ancient Egypt. Debuted in 2020, this title has 10 non-fixed pay lines and a versatile wild/scatter icon capable of delivering huge prizes and triggering free spins. Expanding symbols are also part of the plot, as well as the optional gamble feature.

Vikings are not only handsome but also generous as they are ready to reward with €500,000 every player who is bold enough to face the siren. During free spins, Vikings Go Berzerk and enter the same-named mode that enables them to always defeat the siren and turn into a sticky wild until the end of the feature. Ragnarök bonus that can be activated randomly hides a possibility to win the Golden Treasure Chest filled with much bigger bonuses than the regular Treasure Chest!

If you like extremely high-volatile slots full of mysteries and prizes, then Rise of Merlin might become your next favorite. Based around the legendary wizard from Arthurian lore, the 5x3 game offers plenty of opportunities to land a max win of €500,000 through the free spins feature enhanced with expanding symbols.

Rich Wilde & the Tome of Madness

Everybody’s beloved hero is back for another epic quest intended to unlock the secrets of the sinister Cult of Cthulhu. Being a 5x5 cascading slot, this game has a unique Portal that unlocks a range of extra features, and when charged with 42 symbols, it opens an interdimensional gate and triggers the Other World free round, which among other perks contains Mega Wilds.

Fearsome yet fascinating flying beasts come to life in this 5-reel 25-pay line slot made by GameArt. Dragon Whisperer boasts three types of bonus rounds where every free spin features Bonus Reel able to triple your win. The game also includes a classic red/black double-up feature, letting players gamble their awards up to 5 times to reach the maximum win of 5,000x bet.

If you’re looking for an out-of-this-world experience, then 5x5 manga-themed Moon Princess is for you. You will spin the reels in the company of three charming princesses that have superpowers able to take you literally over the Moon! Regal beauties will make sure you enjoy even non-winning rounds while clearing all 25 symbols from the grid will activate free spins with an ever-increasing multiplier, so you can win up to 20x total bet in the base game or up to 100x total bet in the free spins feature!

Who says that money doesn’t grow on trees? Pay a visit to Money Farm and see how cheery Chicken substitutes in winning combinations to bring you 5 free spins enriched with multipliers. After each win, you will be offered the opportunity to take advantage of the Gamble feature and try to double or quadruple your prize.

The first hexagonal cascading slot from Play’n GO, Honey Rush has a lot to offer for everyone with a sweet tooth. With a whopping max win of 9000x and a Worker Colony feature that gives players a chance to turn a non-winning spin into a prize, Honey Rush is a great way to have fun. Even though it has a pretty complex structure and tons of extras, this slot is incredibly easy to play and offers wins worth spinning.

What are you waiting for? Go and play!