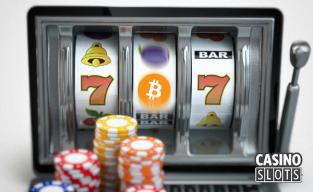 Since the days of one-armed bandits in bars and arcades, gambling on slot machines has changed beyond all recognition. The landscape continues to evolve and one of the newest innovations is the potential to deposit and play entirely using crypto-currencies such as Bitcoin.

Of course, before you play Bitcoin friendly slots, you will need to know a little about how crypto-currencies work. Bitcoins are not a physical entity, instead you earn them by ‘mining’, or completing certain tasks within a network.

Miners have virtual wallets where a record of their tasks are kept. Bitcoins can also be purchased, which is easier than mining them, but there is a strictly limited supply.

Bitcoins can be stored online using a third-party wallet provider or held on a computer using downloadable software. Users can then move funds around to purchase goods, services, or play at a Bitcoin casino. Other digital currencies, including Ethereum, Litecoin and Ripple work in the same way, but so far, none has come close to challenging the market leader.

No central bank or national government oversees Bitcoin or other virtual currencies and transactions are secure and virtually instantaneous. It’s now possible to deposit at a casino, play the slots and take out winnings without using anything other than Bitcoins.

The number of online casinos accepting Bitcoins has grown rapidly and several software providers are now making their games Bitcoin friendly. Let’s take a look at some of these software developers and discover some of the top sites where you can use virtual currencies.

Formerly known as SOFTSWISS, BGaming was the very first company to incorporate the use of Bitcoins and other virtual currencies. They are still ahead of the pack, with a special ‘Provable Fairness’ feature that can only be unlocked when you play with Bitcoins. This option allows you to check previous results to guarantee that random number software was used.

Some of the top Bitcoin friendly BGaming slot machines include Mechanical Orange and Hello Easter, although some 40 games are currently available. Each BGaming slot can be played at popular sites including Jackpot.de, one of the biggest social casinos in Germany.

The multinational Habanero company has developed a range of over 80 innovative slots games. Their library includes 3D-effect slot machines such as Koi Gate, and the popular London Hunter, where players help a detective to solve crimes. Egyptian Dreams Deluxe is another attractive game that uses a 6x6 reel matrix to deliver some exciting bonuses.

You can play Habanero slots at many sites across the world and use crypto-currencies at casinos such as VideoSlots.

The company may have a funny name, but this Lithuanian developer is serious about creating top-notch slot machines. Many of their games, such as Agent X Mission, use state-of-the-art computer graphics to bring the reels to life, while others, like Monsterinos, feature cartoon characters that give a humorous touch to proceedings.

All Mr Slotty games come with their own blend of features, layouts and rewards. This Bitcoin compatible range can be found at some highly rated sites, including PlayFrank Casino.

The Ukrainian studios of Platipus are the source of a number of impressive slots games that can be played with crypto-currencies. Among the range you will find classic Egyptian adventure in Cleo’s Gold which features free games and prize picking rounds in the pyramids. Fairy Forest uses a 6-reel, 50-line format to bring you stacked symbols, respins and free games.

You can enjoy Platipus slots at social casinos, or some of the top real money sites.

The Booming Games developer exploded onto the scene in 2014 and now boasts a selection of over 50 slots that can be played using Bitcoins. Galactic Speedway is a great example of the exciting games coming from this Isle of Man based developer. Some of the best-looking and most successful Booming Games slots include the adorable Sweet Robots and the scary Reel Fear.

Whatever your taste in slots, you can find a Booming Games title to suit at casinos such as CasinoLuck.

Belatra might not be the best-known games developer in the world, but don’t overlook this exciting company, as their Bitcoin slots are well worth checking out. The company is based in Minsk, Belarus, from where they have launched a wide selection on online and off-line games.

Their Bitcoin-compatible slots include the fairy tale themed Princess of Swamp and the fun Lucky Drink, which is based around guzzling beer in exotic locations. Belatra slots are located in a number of popular casinos, check out our recommended list here.

A huge selection of Bitcoin slot machines has been launched by BetSoft. This is one of the most popular developers of all, and their games can be played around the globe. The company is famous for their 3D-effect games, such as The Slotfather and A NIght in Paris, but the 2-dimensional games are still highly impressive.

Betsoft slots have been created with lots of humour and plenty of exciting features. Their games can be played using a range of virtual currencies at some of the top sites.

With a range of around 400 slots to their name, iSoftBet has become a serious player in the online casinos business since they launched in 2010. This London-based company specialises in games based on popular TV shows and movies, such as Rambo, Beverly Hills 90210 and Platoon. Be sure to check out other iSoftBet games though, as slots like Happy Birds and Ninja Chef are just a couple of the innovative games that you can play with Bitcoins.

Unsurprisingly, iSoftBet slots are in high demand and they are featured at a number of the best online casinos, including SlotsMillion.

For a break from slots games, why not play the live dealer tables from Vivo Gaming. These are very rare examples of live games that you can play with Bitcoins and other virtual currencies. The studios are based in Costa Rica and Manila, from where Blackjack, Roulette, Poker and specialist Asian games are broadcast.

The high-quality streaming allows fast gameplay which adds to the excitement of playing at tables hosted by a real person. You will be able to access the Vivo Gaming range at online sites such as 888 Tiger Casino.

Bitcoin and other virtual currencies are becoming widely accepted at online and mobile casinos and now is a great time to check out the ranges from these developers at some of the top sites.