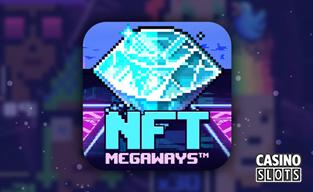 No doubt, 2021 has been the year of the NFT, and, of course, the iGaming industry could not stay aside from the global trend, bringing NFT Megaways, the first online casino slot with unique crypto pixelated characters.

Created by Red Tiger and announced as a game the likes of which the world has never seen before, it did make a splash in the gambling universe. Players hurried to see the wonder and luckily, were not disappointed. Even those completely new to the concept of non-fungible tokens appreciated the colorful Punk-themed story illuminated by neon lights and packed with free spins and multipliers.

What to know more about this one-of-its-kind 6-reeler able to generate up to 200,704 ways to win and deliver hefty payouts that exceed 10,000x bet? Keep reading, the story gets even better!

What Exactly Is an NFT?

Before turning specifically to one of the latest Megaways casino slots, which is the main subject of this article, it seems appropriate to start with a brief introduction of the NFT concept and the way it works.

Short for non-fungible tokens, NFTs are unique cryptographic assets that exist on a blockchain (primarily Ethereum, at the moment) and serve to represent a variety of real-world items. To make things clear from the very outset, in contrast to cryptocurrencies, which are fungible and hence widely used to play slots, NFTs cannot be traded as mutually interchangeable – remember, they are unique tokens and as such, cannot be replicated.

In simple words, if a single unit of Bitcoin is always equal in value to another BTC, each NFT has its own digital signature and cannot be exchanged for one another. However, they can be sold and purchased online – many of them can be bought only with Ether, so setting up the respective wallet is the first step towards owning one of these digital masterpieces. OpenSea, SuperRare, Nifty Gateway, and Foundation are just some of the popular platforms that make a global NFT marketplace.

Why would people pay for what they can screenshot for free?

Well, this is definitely the most common question asked in relation to non-fungible tokens, which became especially relevant after, in March 2021, Jack Dorsey sold his first tweet ever as an NFT for a staggering $2,9M! Naturally, you can screenshot an item you like but you won’t be able to use it, for instance, to integrate into an online slot – that’s why Red Tiger’s parent Evolution Group paid a hefty sum for the digital artworks created by Larva Labs.

By the way, the process of creating an NFT is called minting and involves a kind of smart contract that comprises all the important info about the item, including the name of the author and details on eventual transactions and change of ownership. The contract is usually stored on the Ethereum blockchain and among other things, ensures royalties for the creator and/or owner of a particular artwork. 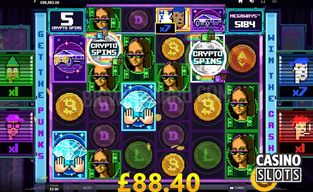 One doesn’t have to fancy punk culture in order to enjoy the unique crypto pixelated world brought by NFT Megaways right to the screens of desktop and mobile devices. Debuted in September 2021, this game belongs to the pretty large group of casino slots designed in a kind of retro techno style, however, four unique collectible characters are what make it stand out from the crowd.

CryptoPunks 914, 3008, 4701, and 8143 were among the very earliest examples of NFTs, and today, thanks to Evolution and Red Tiger Gaming, these distinctive and exotic heroes appear on the 6x7 grid to replace other symbols and multiply winnings. As you have probably already guessed, all four act as wild icons but in contrast to the vast majority of slots, here they can land only on the special CryptoPunks Bar, an extra row situated above the middle four reels.

Get the Punks, Win the Cash!

The motto of the game speaks for itself - when one of the CryptoPunks hits the bar and forms a winning combination with low-paying symbols, it will collect them, increasing the multiplier by 1x for each of the symbols collected. It is possible to land up to two CryptoPunks in the same spin and if they both are part of the same win, their multipliers are multiplied by each other – of up to 30x! However, if a CryptoPunk participates in a win made up of high-paying symbols only, it will be destroyed.

A chain reaction online slot (a similar mechanic used by Mobilots in their chain reactor games), this action-packed machine can generate up to 200,704 ways to win. The number of possible lucky combos may vary on each spin, in accordance with the total number of individual icons that land on the reels. Enhanced with an RTP of 95.66%, this title lets players stake between $0.20 and $10 a spin, and with a little help of lady luck, strike a truly impressive prize of more than 10,000x bet.

What about free spins? 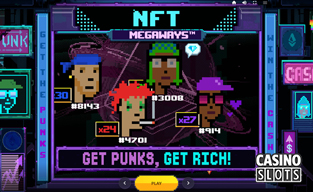 Nothing can compare to the free spins feature, the most sought-after of all conceivable and inconceivable bonuses that have been created by software providers so far. Games from Red Tiger are widely known for their innovative and generous extras, and NFT Megaways is no exception.

Crypto Spins are triggered by hitting at least three same-named scatter symbols. Players get 10 free rounds if the feature was activated with three scatters while each additional scatter awards an extra 5 spins. To make the plot even more exciting, up to six Crypto Spins icons may land on a single spin, delivering a potential maximum of 25 initial free rounds.

And as if that wasn’t enough, the creators of this one-of-its-kind casino slot made the feature re-triggerable! During the bonus mode, free spins are awarded the same way as in the base game: the appearance of three scatters anywhere on the reels brings 5 new rounds while another 5 are added for each extra scatter icon. The maximum number of free spins that can be won per a single round during the feature is 20 and it’s also worth noting that the CryptoPunks’ multipliers accumulated in the course of Crypto Spins will reset only at the end of the bonus.

It’s safe to say that NFT Megaways set a new trend in the online gaming industry. Given rapid advances in technology that drive the evolution of casino slots, all chances are we might not have to wait long for more titles that use non-fungible tokens as a source of inspiration for providing top-notch entertainment.