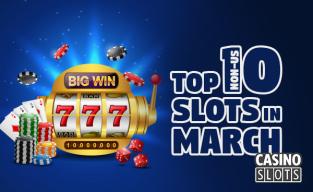 The month of spring, March is a real mood booster that brings alone more hours of sunshine, birds chirping, blooming flowers – a wonderful opportunity to open the windows and let the fresh air in!

It’s fascinating, how a little sun can revitalize our everyday life and make run-of-the-mill things a lot more fun regardless of what we do.

Can it also change our taste in games by encouraging us to switch to the latest releases or rediscover the spirit of good old fruity machines?

Indeed, many just recently launched adventures have been incredibly popular among online casino punters this March. While Red Tiger’s Wings of Ra and Pragmatic Play’s Aztec Bonanza are literally on the verge of Top 10, NetEnt’s Oceans Treasure, and Playtech’s Age of The Gods Norse: King of Asgard finished among the 15 most played slots.

What 10 Non-Us Slots Are Must Plays This March?

Continuing with the topic of novelties, it’s safe to say, one of them was a huge success. Perhaps, you’ve already guessed we’re talking about the latest addition to Blueprint’s ever-growing portfolio of branded titles.

...hits hard in popularity and immediately jumped in the top ten! Inspired by the Emmy-winning animated show, this HTML5 masterpiece was released across the UK and European markets at the very end of February. If you still haven’t given it a spin, it’s time to figure out why other players love this slot so much.

Aside from that, the roster of ten most-played pokies can’t brag of surprises headed by well-familiar to the audience long-standing favorites. Well, the fact that the whole three quests for gold are driven by Megaways™ is a clear sign this once-of-its-kind reel mechanic is gaining momentum. Let’s take a closer look at the current trends.

Once a hit, always a hit – a perfect description of this epic 5-reeler, which is obviously not going to surrender! The most played game during the first two months of 2020, Book of Dead continues to be the best read for slots buffs remaining #1 choice also in March.

With us for over five years, handsome explorer Rich Wilde is still the best company one could ask for when heading down a secret path that leads to untold riches of ancient Egypt. Definitely not for the faint-hearted, this 10-pay line treasure hunt is loaded with free spins and expanding symbols to brighten up the exciting gameplay with not less stimulating prizes.

Even though NetEnt’s slot library is one of the largest and most diverse out there, released in 2012 Starburst remains the champion in popularity among online casino patrons. When you open this sparkling chamber of secrets, the combination of low volatility and an affordable betting range is what strikes the eye first.

Available at just €0.10 a spin, this diamond extravaganza is easy to play yet full of excitement thanks to more frequent wins caused by low variance. In addition to that, its ten lines pay both ways while expanding wilds help complete more lucky sequences and trigger advantageous re-spins.

The exact opposite to almost classic Starburst, Bonanza is a hell-roaring machine powered by high volatility and ground-breaking Megaways™ engine able to generate 117,649 winning ways. However, its range of stakes if far from being reserved only for high-rollers, providing plenty of options to suit all bankrolls and gambling preferences.

... enhanced with the unique BTG’s mechanic, the greatest number of triumphant combos is reached when each of the six reels contains its maximum possible amount of symbols. When it comes to extra features, here you can count on worldwide beloved free spins boosted by generous multipliers.

One of the most action-packed games created by Pragmatic Play, Wolf Gold lets you plunge into the magnificent world of awe-inspiring landscapes full of beautiful animals.

Numerous state-of-the-art perks such as giant symbols and stacked wilds are a part of amazing nature that covers a standard 3x5 field enhanced with 25 pay lines. Fabulous Money respins represents true highlights of this wondrous trip adding all the values together to reward players with Mini, Major or Mega Jackpot.

One more title designed by Swedish NetEnt, Gonzos Quest is even “older” than Starburst as it came into the limelight in 2011. The pioneer of the now-famous Avalanche feature, this slot is based on an uproarious plot that lets us join one eccentric adventurer known for his epic beard and untold hunger for riches.

The best thing is…

… not the sharpest tool in the shed, he needs the support of the players to discover mysterious Eldorado and get hold of unspeakable wealth. In his turn, he always has something up his sleeve: striking multipliers produced by powerful avalanches and striking free falls designed to generate truly impressive wins.

In the top ten non-US slots since the beginning of the year, Dynamite Riches offers a lot of action to all fans of the Red Tiger approach to the idea of making slots. Equipped with a 5x4 grid and dedicated to the gold mining, this game stuns with thunderous blasts provoked by the whole four special add-ons.

Incredibly explosive, all of them including Mega and Random Wilds, Win Multipliers, and Gold Spins can generate not only adrenaline rush but also exciting payouts. The same can be said about another extra, which kindly removes from the screen all low-paying symbols.

Not exactly the sequel to Book of Dead yet another 5-reel blockbuster themed around the legends and riches of ancient Egypt. Launched as the first Play’n Go release for 2020, Legacy of Dead was warmly greeted by the gambling community.

... this game not only amazes with superb visuals and great design but also with innovative ideas in terms of bonus features. For instance, a versatile wild/scatter symbol can substitute for all other icons, at the same time paying prizes and triggering free spins.

A true paradise for all fans of futuristic stories, Reactoonz greets courageous space explorers with a 7x7 cosmic turf inhabited by funny aliens. Driven by high volatility, this slot is stuffed with perks, all have hi-tech names such as Quantum Leap, Implosion, Demolition or Alteration.

It’s safe to say, the powers of the aforementioned bonus features perfectly befit the space-age adventure given the magical transformations they perform. By the way, Gargantoon, an always hungry dude, is full of pleasant surprises – do not miss the chance to benefit from the dropping wilds he leaves everywhere!

This slot could be a perfect symbol of the fruitful NetEnt-Red Tiger partnership being nothing but an advanced version of NetEnt’s Piggie Riches enhanced with famed Megaways™. Thanks to Red Tiger Gaming, the rich couple now lives in the glamorous 6x7 estate able to deliver imposing payouts of up to 10,000x bet.

Spiced up with Mega Wilds and increasing multipliers during the free spins feature, this slot offers benefits of high volatility in combination with a matching betting range that ends already at €10.

Wubba Lubba Dub Dub! Welcome to the world of Megaways™ populated by bunches of freaking aliens. And, yes, Rick and Morty are ready to take you on the unforgettable journey to faraway planets scattered throughout the universe.

You can start spinning the reels already at €0.10 to take advantage of Vindicators free spins or Federation wild spins. Every cascade increases the unlimited win multiplier for truly galactic rewards and unparalleled experience!