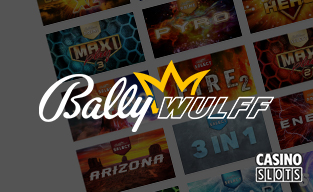 Bally Wulff is a company that traces its history far beyond the history of online casinos and online slots. Established in 1950, the company has long worked with arcade games and video slot terminals. They are a somewhat regional company, and rather surprisingly they are not first and foremost entertaining the English-speaking markets, attest by the fact that their homepage is available in German and Spanish only.

But of course, the slots themselves are today available in many languages, and the company is well-present in the biggest casinos. It’s worth noting that Bally Wulff is today represented by another brand, Gamomat. Most of the games are available via both brands, but the selection isn’t 100% the same. The company is based in Berlin, and is very well known in European markets.

Sorry, there are no casinos by Bally Wulff available in your country. Try these casinos instead.

Before we delve into the details about online slots and their characteristics, it’s worth noting that the company produces a lot more than that. One could consider them a producer of all sorts of entertainment and electronic equipment. In fact, they even produce gaming chairs. Most of these are aimed at traditional casinos, running from the video game terminals to network equipment required to operate and interconnect them.

It’s fair to say that today something that is called land-based brings up very nostalgic images of simple machines, but that isn’t actually quite true anymore. A lot of technological changes have come around in this area as well, including management software similar to what online casinos use, and a lot of that is directly translated to online gaming, even if the latter is not the main area this company excels at.

So what sort of online games can you expect from this company? Safe to say, many of the most popular titles have been converted from their land-based counterparts. These feature a rather traditional setup from three to five reels, through which paylines connect left to right in order to gather symbol combinations.

A lot of time and effort has gone into perfecting those setups, also giving plenty of room for choosing exactly the sort of game you want. Low, medium or high variance are mixed with one to dozens of paylines. You get to pick and choose what you are after. Bonus features tend to be limited to extra spins and the classic gamble feature. The latest games might go a bit further than this, but still, it’s a rare sight to spot other specials available.

You don’t operate for more than half a century, especially in the field of gambling, without proving your legitimacy. The company itself holds a license from Germany, but they are also partnered with licensed aggregators like SkillOnNet.

Though Bally Wulff is clearly aimed at different markets, you wouldn’t notice that their games are ports from land-based slots. Unless you count in the traditional hallmarks of such games, like reel setup and paylines. This is because the interface, as well as the quality of the graphics and sound effects, are at the highest possible level. If you’re into classic slots this is your number one choice!