Some of you might have lived under a rock for the past 25 years or so, but if that’s not the case, then you’ve probably heard about the company called DLV. Sure thing, those three letters may not mean much, but that is the name of a brand that’s been super busy ever since 1994.

They had started off in Latvia, but soon enough they have realized that the domestic market simply isn’t big enough for all their ambitious plans, so they started expanding, and nowadays you can find their products in Europe, Asia, the Caribbean, South and Central America.

The company has more than 400 employees and all of these are highly skilled professionals, devoted to one common goal - providing the best possible online and land-based gambling products. 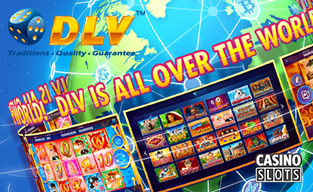 Yes, you’ve read that right, they make upright and slant top machines for land-based casinos, along with a multigame line of products and their own progressive jackpot system.

As far as online operations are concerned, at first they had introduced their own online betting site, which was known as DLV Bet, a modern and easy to use a venue that’s highly popular among many punters.

All of their online products are made using the latest HTML5 platform, so they can be enjoyed on both mobile and desktop devices. Last but not least, let’s just point out that all of their products are fully safe as the company operates under a license that’s been issued by the Lotteries and Gambling Supervision Inspection of Latvia.

When we’re speaking of online products, it’s safe to say that the main focus at DLV is on the video slots. This is only logical as these are the most popular products among most players all around the world.

Their portfolio is quite diverse, as they had worked on numerous different types of slots throughout the years, covering many different themes and subjects. Actually, the portfolio covers more than a hundred titles, and it would really be hard not to find something you like over there.

They have simple games made the old school way, which would best be suited for inexperienced players, but on the other hand, they have the flashy new video slots with many bells and whistles, amazing sound effects, and top-notch graphics and design.

These come jam-packed with bonus features, while the RTP ranges from the rather low 92% to 98%. Most of the games made by DLV come with a rather unique auto-save function.

DLV may not be among the flashiest software provider in the iGaming world, but as you can see, they are a quite clever and diverse bunch of folks, always thinking forward and always expanding their operations in accordance with the customers’ wishes.

They cover both brick and mortar and online operations equally well, always conforming to the highest international standards, so their future couldn’t really be any brighter.