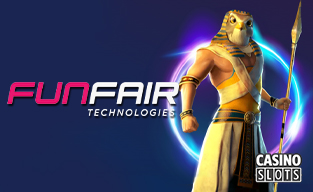 Established in 2017, FunFair Technologies is a software company based in London and Dublin. It began its virtual life as the brainchild of Jeremy Longley, Oliver Hapton, and Jez San. The first two gentlemen are widely known as iGaming veterans, while some of you might know of Jez San as a famous investor and technology entrepreneur.

Over the past few years, the folks at FunFair Technologies have been quite busy with many expansions, and as the final outcome of it all, they’ve become one of the largest and most experienced providers in blockchain online gaming sector.

Nowadays, these guys aim for a decentralized online gaming system based on the innovative blockchain technology. They claim that their platform is the fairest and most user-friendly and that it’s about to revolutionize online gaming as we know it.

Well, let’s dig in a little deeper and get to know these fellows a little better, shall we?

Sorry, there are no casinos by FunFair available in your country. Try these casinos instead.

Of course, we are here because of the games, and not just any games but slots. Sure, they do have a few aces up their sleeves, but let’s not get ahead of ourselves just yet.

Besides a widely diverse portfolio of games, these guys proudly offer their own white label solution. It’s a massively streamlined turnkey operation that’s completely transparent and it doesn’t involve any monthly minimums or set-up fees.

The whole platform is based on the Ethereum blockchain technology that’s very easy and cheap to run, not to mention that it provides unmatched levels of security and fairness. On top of all this, it requires only 10% of the network processing costs you’d have with an online casino that isn’t based on blockchain technology.

They base the whole thing on the FUN token, created as a cryptocurrency based on Ethereum. It can be purchased on various exchanges and over here it is used for developer rewards, operator license fees, and players wagers, among other things.

Probably the most important bit here is that this isn’t some closed type of system, which means that games from other developers can be incorporated here, as well.

Speaking of which, let’s check the modest but smart portfolio that the guys at FunFair Technologies have managed to build so far, shall we?

Which Games Do They Offer?

Just after a quick glance over the portfolio, it’s easy to conclude that it can be segmented into three different categories of games that can be played on both mobile and desktop devices...

First off we have the table games, the VIP titles, and the virtuals.

The first and the only virtual game so far is Raceday Horses, where you simply need to race to the finish and win. Of course, it’s much easier said than done.

Also, there are five different table games, two of which also fit the VIP category of games.

With European Roulette, they’ve tried to reinvent the wheel by bringing into the world of blockchain, and giving it all they have when wondrous 3D graphics and design is what we’re speaking about. Caribbean Stud is a whole new take on an age-old game of poker, as blockchain technology gives it a new lease on life.

If you prefer simple and faster games, you are surely going to love Hi-Lo Max. The two VIP table games in the portfolio include Baccarat VIP and Blackjack VIP. The Baccarat is basically a high roller version of the classic casino game, and the same goes for its Blackjack counterpart.

The next segment of games includes dice, scratchcard, and instant win titles, which are highly popular in the UK. The only dice game they have is called FUNDice, and it’s actually the original Satoshi Dice game with a blockchain overhaul.

There are also two scratchcard games in the portfolio - Treasures From The Crypto and Fate Of Thrones. The former is simply a galactic classic, while the latter borrows heavily from the popular TV show of a similar name.

Ocean Blaster 2 is a classic first shooter, courtesy of Spike Games, Wheel Of FUN is derived from the classic Wheel Of Fortune concept, while Electrobet gives you an opportunity to electrify your bets and score some cool wins.

As far as slots are concerned, they’ve only made six of them so far, but they keep bringing them on, and we especially like the fact that they are quite unique. Just take a look at their School’s Out, which is themed after the legendary Alice Cooper.

Astro Wilds can only be described as a sci-fi classic, where you need to find a lost fleet on an intergalactic mission, only to be blown away by out-of-this-world graphics and features.

Cyber Hunter 2080 puts you in the role of a hacker who needs to hack the city in order to score some colossal wins. Treasures From The Crypto is a whole new take on the age-old ancient Egypt theme, while Bounty On The High Seas is the world’s first cascading slot on the blockchain.

Last but not least, there’s also the magnificent Fate Of Thrones.

FunFair Technologies is definitely among the most forward-thinking software companies out there. The progress they’ve made over only a few years is immense, and it surely gets us thinking where these guys will be in the next 10 years.

They haven’t focused on quantity, so their portfolio isn’t that big, but what they did make so far shows gargantuan potential. Couple this with the fact that they obviously follow all the technological trends quite closely, and it’s easy to conclude that these guys are up for some big things in the forthcoming future.