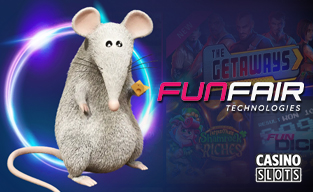 FunFair Technologies is a highly innovative software company from the UK, that first opened its virtual doors in 2017. The company was started by two iGaming veterans - Jeremy Longley and Oliver Hapton, along with the famed technology entrepreneur Jez San.

They’ve spent the last couple of years with a strong focus on expanding their operations, so nowadays they can be considered as one of the leaders in the blockchain online gaming sector.

Their main aim is to provide the players with a fully decentralized online gaming system that’s based on blockchain technology, as they strongly believe that such a system provides the most user-friendly and fairest solution. Ultimately, they are on a mission to revolutionize the world of online gaming.

This may come off as a bit too ambitious to some, but if we dig a little deeper we will find that FunFair Technologies does indeed offer their own, unique white label solution.

The solution is a turnkey operation devoid of any set-up fees or monthly minimums, and the whole thing is based on the FUN token, a cryptocurrency created on the basis of Ethereum. These tokens are used for players wagers, operator license fees, developer rewards, and more but the best bit is that it provides levels of fairness and security we’ve never seen before.

On top of it all, the solution is open to games made by other software developers, as well.

…we need to take a closer look at FunFair Technologies portfolio and check what games they have in store for us.

So far you’vee probably realized that the good folks who run FunFair Technologies are quite a busy bunch, but on the other hand, they’ve only managed to produce six video slots so far.

…this doesn’t mean they’re lazy, it just means they are focused on quality instead of quantity, as all of their games can only be characterized as pure works of art. All the games come with top-notch graphics and design, and there are also plenty of additional features and bonuses that make the gameplay even more immersive and increase your chances of scoring massive wins.

Astro Wilds - If you’re into science fiction, you are simply going to love this one. It is an intergalactic adventure in which you are responsible for saving a lost fleet and having some great time while doing so.

Cyber Hunter 2080 - Have you ever dreamed of being a hacker and deploying some drones over a city? Well, this one puts you in such a role, and it also promises huge potential for scoring some massive wins.

Alice Cooper: School’s Out For Summer - It became cool to make slots themed after great rock n’ roll bands and artists, so over here we have one that comes right from the king of shock rock. If you’ve been a fan, you are going to be ecstatic about this, if not, you are still going to have bucketloads of fun.

Treasures From The Crypto - No portfolio would be complete without a game themed after ancient Egypt, but here it comes in a whole new blockchain wrapper.

Bounty On The High Seas - This is a unique game. Sure, it does feature the standard five-reel, 20-payline format, but it is actually the world’s first blockchain game that has the cascading streak feature. Oh, did we mention it is themed after the world of pirates? Ahoy, mates!

Fate Of Thrones - Heavily inspired by the popular TV-show that bears a similar name, this is a video slot that gets you back to the times when dragons ruled the world, and you were supposed to wander the lands of ice and fire to hunt for hidden treasures.

Some of you might have noticed that there are no classic fruit machines in the video slot portfolio, but that’s surely going to change, as these guys keep announcing new games to be added to the existing roster.

What About Other Games?

It comes as no surprise that these guys make other games besides video slots, especially considering the fact that their home market comes with its own peculiarities.

Virtual games are quite big in the UK, so it’s no wonder these guys have Race Day Horses, a virtual horse race title.

If you’re a fan of table games, you can try your luck with European Roulette, Caribbean Stud, Hi-Lo Max, and the two VIP titles - Baccarat and Blackjack.

Scratchcards, instant win titles, and dice games are also very popular in the UK and some other markets, so you can try some of those as well, if they fit your fancy. The titles that fit this description include FUNDice, Treasures From The Crypto ScratchCard, Fate Of Thrones Scratchcard, Ocean Blaster 2, Wheel Of FUN, and Electrobet.

All things considered, you will struggle hard to find a company that’s as bold and innovative as FunFair Technologies. When we turn our attention to the games they make, it’s clear that their focus is on quality and innovation, so that explains why there aren’t that many titles in the portfolio.

Just remember the fact that they have only emerged in 2017, and you will be faced with the fact that the progress they’ve made over the course of just two or three years is a sight to behold. The good folks who run this show are obviously well aware of all the technological trends, and they are also very good at keeping up with all these trends.

With such a strong focus on technology, innovation, and cutting-edge design, these guys are destined to make colossal things in the world of iGaming. That’s the main reason why you need to keep an eye on FunFair Technologies.