Trends come and go, and it’s always been like that. The world of iGaming isn’t immune to this, so in recent times we’ve seen a new bandwagon that everyone has been trying to jump on.

As the industry is hungry for innovation, large companies such as Microgaming have started signing deals with smaller indie software developers, and that is just the case with Neon Valley Studios.

Microgaming folks have always been the pioneers, ever since they provided the software for the world’s first online casino in 1994, and now they keep pushing the boundaries further by introducing a roster of small and independent software developers, including GameBurger, Pulse 8, All41, Switch Studios, Fortune Factory, Stormcraft, and Triple Edge.

Neon Valley Studios is actually a small team of highly skilled professionals who are on a mission of representing the new and temporary Las Vegas. Since they are very creative, their aim is to provide the non-US players with a fully immersive Vegas gambling experience.

These geniuses want to redefine the meaning of the phrase “Viva Las Vegas”, as they evoke the buzz and the glamour of the Vegas strip, all the bright lights and the sounds of Fremont Street, and combine it all with the energy and raw beauty of the majestic Mojave Desert. 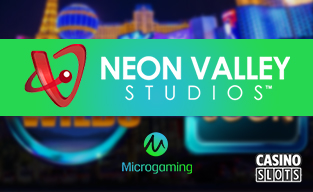 The Deal with Microgaming

This is believed to be quite a lucrative deal for both says, and perhaps it’s best to hear what their representatives had to say about it. John Coleman, CEO of Microgaming said: “Our studios strategy is designed to bring greater choice, innovation, and quality to the market. Neon Valley has years of collective gaming industry knowledge and expertise, not to mention their own distinctive style and personality, and we are delighted to add them to our global roster of independent game studios.”

It goes without saying that the good folks at Neon Valley Studios were stoked, and that was confirmed by Brian Perego, the Senior Creative Technical Director: “At Neon Valley Studios, we are dedicated to producing polished games of the highest quality, injecting our knowledge of slot design through the synergistic integration of game mechanics, visuals, and the latest technology. Our relentless drive to create engaging gaming experiences for players is founded on our passion for games and the latest technological developments. We are delighted to bring ‘the spirit of Vegas’ to Microgaming on an exclusive basis, with Aurora Wilds marking the first wave of exciting content to come from Neon Valley Studios.”

So, what is all that special about these guys, then?

As we had already mentioned earlier, these guys have only published one game so far, and that is probably why they only have a modest amount of info on their site. The best bit about it is that they have announced more games coming our way.

Aurora Wilds is their firstborn, and it shows great potential. Let’s first understand what its creators have to say about it:

“Aurora Wilds is a trip back to nature that paints a beautiful picture of native lands and majestic spirit animals. Northern lights glimmer across the sky, and sounds emit a magnetically colourful array of atmosphere, subtlety, and high charged wins. Based on a successful formula, Aurora Wilds was designed with familiarity and fun in mind. Fans of this popular formula will enjoy the captivating art and wonderfully stylized totem animals, each one capturing the character, power, and unique strength of each of these magnificent creatures.”

The game actually goes back to the ethnic roots of the Indians, all the way back to the earliest days of North America. It is a video slot directly inspired by the culture of the countless Native American tribes and many of their customs.

It’s clear that these guys have a rich imagination, as the graphics and animations are nothing short of excellent. There are so many complex details, and the game is accompanied by relaxing and soothing sounds of the Indian flute.

All the symbols on the reels are depicted in a traditional Indian manner, and these are accompanied by the Wild that can be expanding and retriggering spins. There is also an opportunity to score a jackpot!

When you take it all into consideration, It’s clear that the good folks who run Neon Valley Studios have a very bright future ahead of them, especially if we remember the fact that they’re on Microgaming’s roster of indie software developers. Aurora Wilds is a great demonstration of what they’re capable of, and we are really looking forward to all of their forthcoming games.