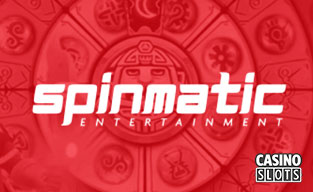 Spinmatic is a company that specializes in video slots, and the very name implies rather accurately what it’s all about here. Even though they are among the younger batch of online casino software companies, as they’d started off in 2017, their games speak for themselves.

So, let’s dig right in, and see what these guys have stashed up, shall we?

With a mission to revolutionize the online gambling concept, these guys rely on state of the art technologies, such as the HTML5 platform, which makes it possible to enjoy all of their games both on mobile and desktop devices. In recent times they have signed a deal with CasinoEngine.

This will make it possible for their games to reach an even larger number of players, as this is the ultimate place for any type of online casino related content.

When we’re speaking of Spinmatic products, it’s great to know that there is full support for numerous currencies and languages, and there is an option of customization in order to cater to specific markets.

The first thing you notice when glancing upon the palette of games they have on offer is that there are both classic and modern games, there are jackpot slots, but you will probably be amazed by the cartoony graphics, and the magnificent bonus features on offer.

Most of the games follow the common five reel setup, but quite often they will also feature animations that add a neat flair to it all, especially when you score a big win.

It’s good to know that all the slots come certified by some highly reputable third parties such as RNG and iTech Labs. As we’d mentioned earlier, all the games can be played on different mobile and desktop devices, too.

Poseidon has to be their most popular game. It features an underwater theme where the ancient gods of seas rule them all. The graphics and the sound effects are out of this world!

Another fan favorite is Ed Jones And Book Of Seth. If you’ve ever watched any of the Indiana Jones movies, you will instantly realize that the main protagonist resembles our favorite archeologist quite closely.

These guys are very keen on storytelling. Just check out their Book Of Eon. It is a game in which a couple gets separated by death but tries to reunite, fighting a slew of different obstacles.

Besides these, there are hundreds more!

What can we say? These guys are among the most commonly used software providers in the world. Spinmatic is basically an example of how to run an online casino software company, and we’re really having a hard time finding any major issues over here. It surely is no wonder that they are among the best ones out there.