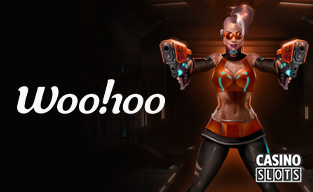 What’s the last time you’ve been genuinely happy? So happy, that you’ve actually said “woohoo” out loud. Well, what if we told you that there is a software company that makes the happiest video slots and they’ve named their company - Woohoo Games?

Even though it may sound like a silly idea at first, when you take a closer look, the whole thing makes so much sense, especially because their games will really put a big smile on your face, and make it stay there for quite some time…

The folks who run the show claim that they are expert game makers, and since their main focus in “flawless user experience and stunning user interface”, they allow the players to place their attention where it really matters - and that’s fun. Actually, they say that they make games that make the punters go “woohoo!”, and that’s how they’d named the company in the first place.

This clever bunch has decided to make slot and table games that apparently have no boundaries whatsoever. First of all, this means their games are designed so that they look and work equally well across a wide array of different mobile and desktop devices.

The secret formula behind this success consists of three distinct elements:

Surprise - The players always expect the unexpected, so it’s good to add little moments that add to the overall surprise during gameplay.

Engage - The games shouldn’t provide us with mere gameplay and mechanics. They need to tell us stories, and by “stories” we mean only the good ones. The gaming experience simply must be an immersive one, that takes you on a journey to discover new worlds.

Reward - All players like being rewarded, especially the loyal ones. From extra spins to accumulated jackpots and everything in between, these guys seem to offer them all.

…these guys make games, and those are predominantly video slots, table games, and bingo titles. The portfolio isn’t exactly the largest one in the industry, but on the other hand, it is diverse enough to tickle the fancy of even the most discerning gamblers out there.

What’s even more important, they have signed their fair share of integration agreements with some of the industry giants, such as BlueOcean Gaming and Nektan.

Each new player on the market aims for world domination, but the smart guys like Woohoo Games aim for the expansion onto the Asian market, as it’s a large one and the fastest growing one at the same time.

Do They Only Make Video Slots?

As mentioned earlier, Woohoo Games are focused on video slots and table games, so let’s take a closer look at the stuff they do, shall we?

Caesar’s Conquest - This game is your ticket if you wish to experience the glory of ancient Rome and enjoy the luxury once reserved for emperors only.

Cyberpunk Wars - Have you ever dreamed of the future with hi-tech rebels, where you are part of some gang, trying to survive in the post-apocalyptic world? Well, this one is for you.

Racer Babes - Fast cars, sexy girls, bucketloads of fun. What’s not to like?

888 Deluxe - What about this one? Well, no portfolio would be complete without a fruit machine, that’s what.

Zombie League - Have you ever thought about putting soccer and zombies into a video slot? Neither did we, but amazingly it works. Like a charm.

Cleo’s Charms - Another type of game that can’t be missing from an online casino software portfolio is one themed after Ancient Egypt, right?

Cricket Kings - Highly popular among punters from India and the UK, this one is based on the game of cricket.

If you’ve grown tired of video slots and you wish to get back to the very roots of gambling, perhaps it’s a good idea to visit the table games section of the portfolio.

Andar Bahar - This is a traditional Indian card game that’s also sometimes referred to as Katti. Still, this is a highly modernized version of the popular game, embellished with amazing sound effects and interactive animations.

Teen Patti Rapid - Another traditional Indian card, and of the first ones that allow a player to bluff. If you haven’t tried it before, you’d better do it now - you’ll thank us later!

Teen Patti Pro - This is the modern approach to the age-old concept that hails from India, and, as the makers say it offers “three times the choice, three times the fun.” It simply needs to be tried, it’s so cool, that it’s almost impossible to explain.

Spin The Wheel - As you’ve probably guessed, this is their own new spin on the age-old game of roulette that comes with realistic sound effects, amazing animations, and rather colorful design.

European Roulette - They say that they’ve reinvented the wheel with this one, but it is actually a decent take on the game of roulette and a less radical when compared to their “Spin The Wheel” game.

American Roulette - Quite similar to the previous, but still with its own unique flavor.

Let ‘Em Ride - If you’ve thought there are no poker games here, you’re wrong. This could be the best way to experience the thrill of the dice and one of the best table games out there.

Even though they have only started in 2020, the good folks at Woohoo Games seem to bring happiness with their mantra wherever they show up.

Yes, their portfolio is still quite a modest one, but the first steps they’ve taken so far definitely show great talent and promise even better results for this cheerful bunch.

We will sit back with a huge smile and wait for even more “Woohoo” games that could come our way in the forthcoming future.