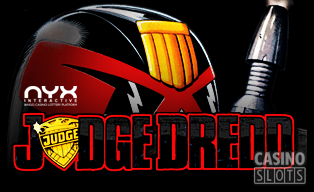 NYX Gaming Group has recently announced that they have signed a licensing agreement with 2000 AD, to create a Judge Dredd themed video slot game.

Judge Joseph Dredd originally appeared in 2000 AD’s graphic novels in 1977.  Since his creation, he has starred in multiple; comics, books, video games and films.  There have been two films based around Judge Dredd.  The first starred Sylvester Stallone in 1995 (Judge Dredd), and the second Karl Urban in 2012 (Dredd).

If you haven’t come across Judge Dredd before, then the story is based around an American law enforcement officer that has the authority to arrest, sentence and even execute a suspect at a location of a crime.

NYX Gaming Group has said that their Judge Dredd themed slot game will start to appear on the market in the summer of 2014.  They are planning to create video slot games, mobile games and even bingo games.