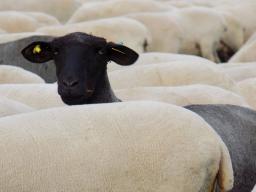 On April 6, a new online slot made its debut at Crazy Vegas Casino. Produced by Microgaming, the name of the new game is Bar Bar Black Sheep, and it's a classic slot based roughly on the nursery rhyme by the same name. This is a good example of the three-reel slot genre starting to get back into favor, and they aren't the only company that has taken advantage of this with new classic slot offerings so far in 2016.

Crazy Vegas Casino's newest release is also Microgaming's newest release, and it uses a really old format with one payline spread across five reels. The main feature of the game involves the black sheep wild symbol. It substitutes for any symbol in the game, but if you get a single bar, a single bar and the black sheep, in that order, then you activate the jackpot payout, and that's where the name of the game comes from. It's a clever play on words for sure.

Including the wild symbol, there are really only six symbols in the entire game. Half of them are the single, double and triple bar symbols. This leaves the white sheep, the black sheep (wild) and the bag of wool. The bag of wool kind of takes the role of the cherry from traditional fruit machines in that you only need one to get a 6x payout (with three coins) or two to get a 12x payout. The top jackpot is 1,600x, but three of the white sheep at 180x isn't bad either.

About Crazy Vegas and Microgaming

Crazy Vegas Casino is one of the most well known online casinos that uses the Microgaming software. They hold the eCOGRA Safe & Fair Seal, and they're widely recognized as one of the best options to get in on the action if you want to play with the Microgaming Quickfire software. This software platform also includes several games from third-party providers, and they're hand-selected for inclusion in the Quickfire platform. Adding more games like this gives players access to titles with a variety of styles and approaches, and it increases their available game selection in a major way.