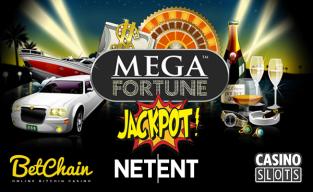 The Mega Fortune video slot is known for its big progressive jackpot that has previously held world records for both desktop and mobile. Net Entertainment has paired with Betchain to bring players an opportunity to hold a world record in what could become one of the largest jackpots in the history of the industry.

How This Pairing Works

The Mega Fortune Pooled Jackpot is designed to give players a larger win than they would normally get with a progressive payout on this game, even though it's already regarded as one of the largest in the industry. If you hit this big jackpot at BetChain, you're going to become an instant millionaire multiple times over, and that's as good of a reason as any to log on and get in on the action. This is an online slot player's dream, and it's the exact kind of thing that we like to see players go for because it allows you to hit a life-changing payout in a single spin.

To make all of this even more attractive of an option, players can get in on the action from their mobile devices as well. Mega Fortune is fully compatible with both tablets and smartphones no matter what kind of operating system or device type you use. The only caveat is that you need to have a connection and an updated web browser. If you have those two things, which virtually all mobile devices these days have, then you'll have no problem getting in on the action while you're on the go.

Mega Fortune is known to be Net Entertainment's largest progressive jackpot game, and it's one of the two largest and most popular progressive slots in the industry as a whole. Its only comparable rival is the current world record holder Mega Moolah by Microgaming, and even then, NetEnt's previous record was only broken by a very narrow margin. It's clear that this is a game that you want to get some playing time with if you're shooting for the biggest jackpots in the game today, and BetChain is the place to do it.