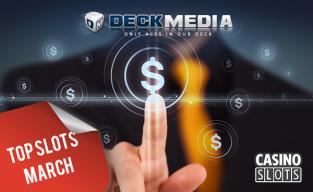 The month of March saw some interesting trends when it comes to the most popular slots running at online casinos operated by Deckmedia. The five most popular online slots provided by Realtime Gaming on these sites were Aladdin's Wishes, Achilles, Cash Bandits, Caesar's Empire and Sweet 16. What you can see from this listing is that, at least for RTG, the more established games with a longer history are getting a larger percentage of the play than the newer titles.

For Rival Gaming, we can see the exact same kind of trend. The top five Rival-powered slots were Five Times Wins, Mystic Wolf Mobile, Arabian Tales Mobile, Catsino Mobile and Golden Gorilla Mobile. Another trend we can see here is that, even though these titles are all a little older and established, a ton of people were getting in on the action with mobile-specific versions of the games.

Pragmatic Play had Hot Safari, 888 Gold, Queen of Gold, 3 Genie Wishes and Dragon Kingdom as their top names. They don't have mobile-specific versions of their games, but you can see that four of these five games have been around for a while, which matches the trend we've seen with the other providers.

BetSoft saw that Alkemor's Tower, Good Girl Bad Girl, Greedy Goblins, Frankenslots Monster and Charms and Glovers were the five most-played games of the month of March. Again, this includes mostly games that have been around for a while. This is rounded off by the five top titles from WGS, which were Lucky Irish, Wheel of Chance, Funky Chicken, Fat Cat and Triple 10x Wild.

The Importance of This Data

Lists like this are really important for showing which types of games are getting the most attention from the high-volume players. Because these lists are arranged by the number of spins played and not by the total money wagered on the games, you can see trends across players at all different levels of stakes instead of having the betting results be dominated by high roller play only. It's cool to see which games are getting the most play and how that might affect new releases from online casino software companies.