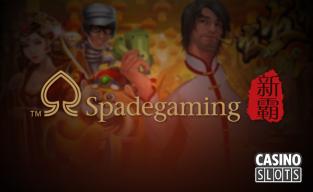 The beginning of a new year is an important time for online casino software companies because what they do then sets the tone for the next 12 months. Spadegaming has shown that they definitely understand this with a recent announcement about a number of releases that came through this month, and they're showing that they want to set a very serious pace when it comes to bringing players new titles.

There are five new online slots by this company. First up is Wow Prosperity, and it's a game with a ton of action since it uses the 1,024 ways format. This has five reels and four rows with every symbol acting as a scatter starting from the left reel and working to the right.

After that is Princess Wang. This title has a bit more of a traditional feel to it with 15 paylines and a set of three beautiful women who grace the reels and help you to get paid.

The more brutal title Gangster Axe has 100 paylines, and it's the third release on this list. It has a more serious and dangerous feel to it, as you can tell by the name, and it's all about a criminal underworld.

Fafafa 2 is the fourth new title, and it has just one payline. This is more of a slow-paced and relaxing game that allows you to really take your time without feeling rushed, but you still have serious chances of hitting some big pays.

Finally, we have Rob Stars. This is a cheeky title about trying to steal a serious amount of gold, but you'll be the one benefiting if you're successful with a big addition to your bankroll.

Spadegaming has been in operation since 2007. They have more than 120 games, and they have offices in Thailand, China, Indonesia, Cambodia, Vietnam and Malaysia. Their most popular titles include Golden Chicken, a game about a blinged-out chicken with a gold necklace, sunglasses and a major attitude. This shows just how varied they can be with their games, and that's one of the reasons why their high-quality online slots have kept the attention on them in the Asian market for so long.