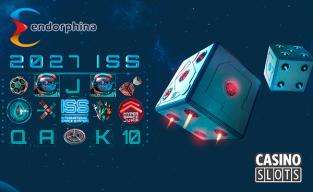 On April 12, 1961, human beings achieved a pretty incredible feat in that we made the very first international human space flight. Endorphina is celebrating the anniversary with the new 2027 ISS slot, a game that centers around an intergalactic voyage with a space theme. This is the perfect slot for celebrating this achievement, and the game itself is nothing to sneeze at either.

This is a five-reel video slot with three rows of symbols and nine paylines. It offers a free spin bonus feature along with multipliers and wild symbols, but what really stands out is the graphics set that this game uses. You'll see giant glowing dice in space, sets of playing cards, astronauts, satellites floating in space and more. It's a cool mix between a more traditional space theme and a gambling motif, and you'll even see roulette wheels on the reels that are lit up like some kind of space station. It's a very atypical approach to a space theme, and Endorphina has definitely done a good job with the presentation and gameplay.

Something important to note is that the free spins bonus feature is a bit atypical. The ISS symbol is the scatter in this game, and getting three or more on the reels will put you in the drivers seat of a set of free spins. All of your free spins are hit with a 3x multiplier on your winnings, but what's critical about this feature that you don't normally see is that you actually get unlimited free spins until a certain number of your spins are winners. This guarantees a certain degree of payout in the future, which is obviously a big winning scenario for players.

Endorphina has been doing a good job of coming out with frequent releases in 2017, and 2027 ISS is just the latest in a series of new titles with various themes and concepts. A value-packed release like this one is good for them as well after the controversy over their Maori slot earlier this year, a game that they spent several months on only to see it attacked as offensive by certain groups of islanders. They're repackaging it now to take away the offensive elements, and it's good to see them continuing with new releases regardless.