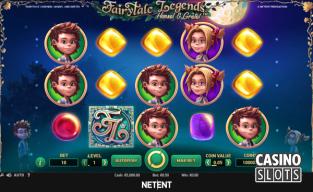 Net Entertainment released a game called Fairytale Legends: Red Riding Hood back in October of 2016, and ever since, players have been waiting for the next release in what was thought to be a series of games with fairytale themes. The newest game in this line has finally been announced as Hansel and Gretel, and it's going to be released on April 24.

From the video footage they've released of the game already, there are several features that can be pointed out. There seems to be stacked wilds with a re-spin feature, three different random features, a free spins bonus round, an instant win bonus round, a candy house-themed bonus round and other ways to win. They're definitely going with a feature-packed approach, which isn't surprising since they did the same thing with the first game in this series. The graphics are also outstanding, which is just par for the course for Net Entertainment, and it has a solid soundtrack as well.

The Importance of NetEnt Slot Series

In 2016, Net Entertainment released the Guns N Roses slot, which was the first of their NetEnt Rocks! series, after a year or so of hype. They followed that up by two more releases in the same series with Jimi Hendrix and Motorhead, and all three of these games were seen as being some of the most important releases of the year. While the Fairytale Legends series isn't using big names like this, it is using stories that people have known since they were children, and the influence could end up being just as significant.

This has been a good year for Net Entertainment so far. They have released a number of new titles and gotten a lot of attention for the moves they have made to get into new markets and new content distribution deals. We haven't seen any industry-shaking releases from them so far like we saw in 2016, but there's still around two-thirds of the year to go, so they have plenty of time to make it happen. We hope that they continue building off the momentum that they've had for a while now with great new releases like Hansel and Gretel for players.