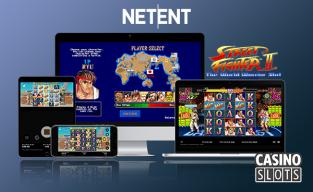 Street Fighter II: The World Warrior is a brand new online and mobile slot from NetEnt that takes a popular arcade game and gives it a whole new format. This is a 5 reel game where players win by landing clusters of matching symbols. Symbols fight each other until one runs out of health points and one is victorious.

The retro-style graphics reflect the fact that Street Fighter II was originally launched way back in 1991. They look great across desktop and mobile platforms.

The Word on the Street

The 5x5 grid of symbols is filled with classic images from the original console game, including 8 or the characters. Players pick their favorites, and when they become part of a cluster, the battle begins. Winners get to enter the Beat the Boss free games round. It's a 4-stage feature with higher win multipliers at each level. But only the winners can progress to the upper stages.

Each high-value symbol in a win adds one point to a meter. Once 7 points are collected, players see wild symbols added in random places on the reels. There is also a hidden bonus round, where the Ryu character gets to smash up a car, just like in the original game.

Street Fighter II: The World Warrior is a medium to high variance slot with average paybacks of 96.06%. Players can spin the reels for between 0.20 and 700.00 per spin.

“Authenticity was critical factor to the design of this game, from the arcade-inspired art and sounds to the game mechanics, as well as the Beat the Bosses and Car Smashing bonus rounds.''

Source - NetEnt on for another branded smash hit with Street Fighter II: The World Warrior slot www.netent.com/games/street-fighter-II 21st May 2020