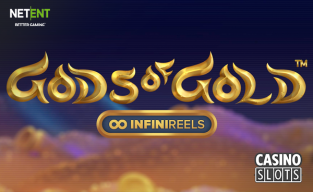 The new Gods of Gold: InfiniReels slot machine from NetEnt has a basic 3-reel, 27 ways to win format. But after any winning spin, extra reels start to appear from the right side, boosting the number of ways, and potentially leading to some massive payouts.

By picking the classic ancient Egyptian theme for their first InfiniReels slot, NetEnt has made sure that it attracts a wide audience. The payout system has been covered in full here - https://casinoslots.net/articles/learning-the-similarities-and-differences-between-infinireels-and-infinity-reels

On any win, one reel is added on the right of the initial 3, giving players 81 ways to win. The new reel spins and if it adds to the winning combination a fifth reel appears. There are now 243 ways to win as the fifth reel spins. This carries on as long as new symbols add to the win, with no upper limit. A wild icon can appear from the 4th reel onwards, helping to complete a winning sequence.

Randomly, the Multi-Slam feature adds 2 or 3 extra reels instead of just 1 at a time. There is also a random respin of the last reel at the end of a sequence.

This exciting new innovation isn't the only feature of the Gods of Gold: InfiniReels slot. A scatter symbol in any 3 or more places launches 10 Win Spins. A win is guaranteed in each.

Players can spin these reels for stakes of between 0.20 and 100.00 on their PCs, smartphones, and tablets at NetEnt casinos.

“Gods of Gold: InfiniReels™ is a major release in our roadmap and is the perfect game to premiere our infinite bet ways concept – a mechanic which we have big plans for over the next year,”