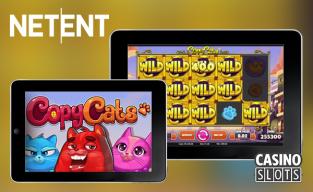 New online slots are always a big deal when they come from Net Entertainment, and they have recently added a video of a title that's sure to get players excited. The new Copy Cats video slot features five reels and three rows of action with 25 fixed paylines. The theme of the game is obviously based on cats, and the cartoony graphics are very strong.

The gameplay in this slot is all about giving you lots of ways to hit wins you wouldn't have otherwise received, which has the effect of decreasing the volatility and increasing your hit-rate. The main feature, and the one that is tied in with the name of the game, is the Copy Cat feature, which can see symbols duplicate themselves from left-to-right across the reels to give you extra winning combinations. Since the wild can duplicate along these lines, it's easy to see how you could end up with some pretty significant payouts.

What's more is that you can get a set of free spins thanks to the bonus symbol, which is a bell on a collar around a cat's neck. It's a very standard way of giving players free spins, but it's yet another example of how gameplay in this title is based around giving players extra payouts. The wild symbols also come stacked in both the normal and free spin modes, so you'll have opportunities for several multi-line wins on every spin as well. This adds even more excitement to the game, and it's clear that this slot is all about giving players a high hit-rate style of play.

Net Entertainment has been doing a tremendous job with their slots so far in 2017, and it's looking like they're also maintaining the momentum that they build for themselves last year with their NetEnt Rocks! line of games and other releases. There were some doubts that they could have as good of a record this year as they did last year with their release schedule, but they're on pace to do just as well. Copy Cats is yet another game that provides players with solid graphics and great gameplay to keep this streak alive.