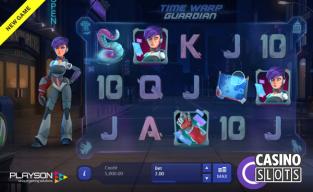 Playson is known for their high-quality, HTML5 slots, and they've added yet another to the list with Time Warp Guardian. This game uses five reels and three rows with the all-ways format to give players 243 ways to win on every single spin. You'll jump through three different periods of time with the Jurassic Period, the Antique Period and the Distant Future, and there are different features and payouts waiting on you in each.

The linked reels and the free spin bonus rounds are the key features in this game. Linked reels make it easier to hit winning combinations by making certain sets of reels sync to each other and show the exact same set of three symbols. As far as the free spins features go, there are different features for each of the three periods of time that you can make your way through, which means three different ways to win in a major way.

It's important to note that this is an HTML5 release because of the importance of the platform. HTML5 slots can be played on both desktop and mobile devices without any significant changes to the interface, which truly makes it the platform of the future. It can do more with the same resources than Flash, and that's why we see so many top software developers moving over to it. While it's time-consuming and not necessarily the best use of resources to switch old titles over to this platform, as they have to be rebuilt from the ground up, the fact of the matter is that HTML5 is the future of the online slot industry.

Playson has a relatively small number of slots with a few dozen titles under their belt. However, they consistently put out extremely high-quality titles, and you can see that right now with the new Time Warp Guardian slot release. This game is absolutely outstanding, and that includes both the graphics and the gameplay. They build titles that are on par with the best games from any company you could think to put them up against, and that's why their games are so popular among players.