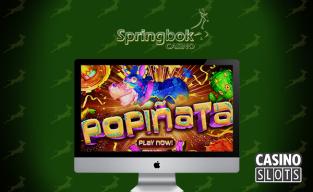 Springbok Casino has a deal with Realtime Gaming that has them get a lot of new releases before any other casino, and that's exactly what's happening once again coming up on April 19, 2017. Players will get the opportunity to play RTG's newest release, a video slot called Popinata, before anyone else when they play at this online casino. It's based on a Mexican party and music theme, and it has a great set of graphics and features.

One thing that players will notice right off the bat is that this new slot has great aesthetic values, and you'll find tons of pinatas of all different types on the reels as a major part of this. When these pinatas pop from winning combinations, you'll get winnings that you won't forget. However, it's not just the visuals that you'll enjoy during this game because it has a very solid style of gameplay as well.

Popinata is designed around a fairly fast-paced and high hit-rate play style, and this starts on a structural level. For example, it pays both left-to-right and right-to-left, and you'll have expanding donkey wilds that give you even more chances to hit winning combinations. As if that wasn't enough, this expanding wild gives you a free re-spin with the wilds held in place. Players are going to feel particularly immersed and engaged in this game, and it's an awesome example of the high-quality content that Realtime Gaming has been putting out for quite a while now.

Something that's important to realize about the context of the release of this slot is that it's actually reactionary in a way. Realtime Gaming was put on the spot for a few years for putting out what many believed were games of a much lower quality than the competition. After some changes in company philosophy, they started pushing high-quality content that rivals some of the best in the industry, and you can definitely see that now. You can get in on the action with their latest game, the Popinata slot, at Springbok Casino when they get the exclusive release of this title on April 19.