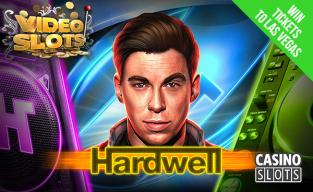 Launched at ICE 2018 in February, the Hardwell slot game from StakeLogic is based around the music of Dutch entertainer DJ Hardwell. Now, in an exclusive promotion with Videoslots, players will be able to compete against each other to win tickets to Las Vegas where they will be able to party with the stars, including DJ Hardwell himself.

Videoslots is offering their players the chance to win this fantastic prize in a free tournament that runs until 29th April. All they need to do is opt in and start playing the Hardwell slot game, which is currently only found at Videoslots, prior to roll-out across other sites that use StakeLogic software and games.

A daily leaderboard will reveal who has played the most rounds on this exciting slot throughout the tournament, with the top 5 players being featured. At the end, theres's an amazing prize for the winner to collect, with free flights to Las Vegas, $1,500 in spending money, four nights' accomodation for two people and exclusive access to the Hakkasan Club, where they will be able to party with DJ Hardwell.

Anyone who completes just 50 spins on the Hardwell slot at Videoslots will be entered into a special prize draw for a share of $1,000, while Rare Trophies will be awarded to anyone who plays the game on enough consecutive days, or completes enough spins before the end of the promotion.

About The Hardwell Slot

Twice voted the number one DJ in the world, DJ Hardwell has worked with StakeLogic and parent company Greentube to produce this slot game. It features his music and image, along with a number of bonus rounds such as free spins with reel upgrades and super spins that are guaranteed to lead to winnings each time.