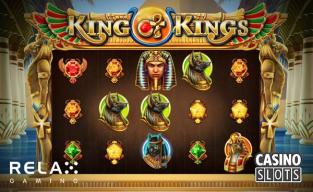 Slots themed around ancient Egypt are among the most popular, and Relax Gaming are sure to find success with their latest game. King of Kings features Egyptian Gods, Pharaohs and precious jewels. King of Kings comes with a randomly triggered Jackpot Stars side game, that can reward players with up to 12,500 times their stake.

This 5-reel slot has the colourful symbols arranged over 3 rows. Statues stand to the sides of the reels and a huge pyramid rises up in the background. It's an impressive sight and the dramatic soundtrack compliments the style.

Jeweled beetles and pyramids pay out the smaller wins when 3 or more of the same kind stop across a payline, while the Gods and Pharaoh return greater rewards. The golden wild symbol is worth up to 2,000x the line stake and also acts as others if needed to complete combinations.

Any 3 or more wild symbols in view will trigger 10 free spins. A sixth reel is added to the game leading to bigger payouts if any symbol lands right across a payline. The free games can be retriggered by more wilds.

King of Kings also features a respins round, awarded when 2 wilds cross a payline. A random symbol is chosen as an extra bonus icon which can lead to big payouts when the reels spin once more for free.

For an extra stake, players can qualify for the Jackpot Stars bonus. It's triggered at random and plays out on a new set of reels, where 6 jackpot prizes are waiting to be collected.

King of Kings is set to be released on the Relax Gaming platform, It joins around 570 other games that can be played on desktop computers and mobile devices in a number of regulated markets. It can be played for stakes of between 0.10 to 52.00 per spin, depending on whether the Jackpot Stars feature is chosen.

Relax Gaming’s slot portfolio has a firm grounding in expertly modelled mathematics and core gameplay, enhanced with truly engaging bonus or side features. King of Kings is another new format for Relax Gaming’s library that delivers on this philosophy.