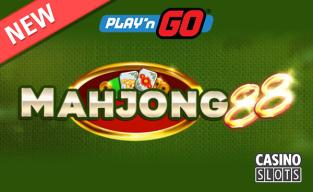 Mahjong 88 is a new slot from Play'n GO that brings a traditional Asian game to online and mobile casino sites. It plays out on an 8x8 grid, where new symbols are revealed from underneath the game and wins come from matching 4 or more symbols in clusters.

Mahjong is a hugely popular game across Asia. It's played on patterned tiles and the new slot from Play'n GO recreates much of the style and gameplay of the classic tile-based game. Instead of new symbols cascading down on reels, a traditional-style door closes with each 'spin' and opens to reveal a new set of symbols.

Any time 4 or more matching symbols are connected together, players win a prize, and it's possible to win multiple times over the 64 tiles that appear each time.

The bonus rounds bring the classic game of Mahjong right up to date. Each spin changes the season, from Winter to Spring, Summer, and Autumn. Different wild symbols are seen in each season and they all have their own special properties. The Winter wild are sticky and remain in place for the next spin, while Spring wilds are added to the reels at random. Summer wild symbols remove adjacent symbols if they can then complete combinations, and Autumn wild symbols fall down the grid, destroying others along the way.

There are lots of other bonuses to enjoy as these colourful tiles flip into place. Each winning cluster charges up a Mahjong Meter. If it gets charged to 33 in a single round, players are awarded a Fortune Frog feature. The Croak feature sees a random symbol paid out as if they were clustered together. The Spawn bonus changes a random symbol into more examples of any other, and the Tongue feature turns all tiles between opposite edges into more of the same kind. In the Hop bonus, a random symbol changes those around it into more of the same type.

If the Mahjong Meter is charged to 88 or more in a round, any of the Fortune Frog bonuses can be activated, but all wins will be tripled. Mahjong 88 also has a Season Bonus feature, where a percentage of each cluster award is set aside and paid out when the seasons change.

With a default return to players percentage of 96.62%, Mahjong 88 is a fun, fair and exciting slot from an innovative developer. It can be played from 5th May 2019, for just 0.50 per spin at online and mobile casinos that use games and software from Play'n GO.