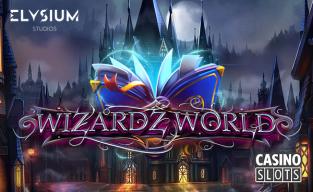 11th April 2022 sees the much-anticipated launch of the Wizardz World online slot from casino games developer Elysium. It’s a 5-reel. 20-line game that players can reach on PCs and mobiles at some of the top casino sites. With stunning graphics and imagery, this magical game features stacked wizard symbols who represent Earth, Fire, and Water elements, and who battle for supremacy in a thrilling bonus round.

Set among the streets of a Medieval town, the reels of the Wizardz World slot feature colourful playing card suits, potions, spell books, and 6 wizard characters who can fill whole reels. A wild wizrad also appears stacked, in what Elysium term a Fat Tile feature.

Join the Battle for Multipliers

Random nudges help players to see these characters in full, and if side bars fill to either side the reels, they do battle. Players choose an element before the fight begins, where 2 random wizards appear and where Water beats Fire, Earth beats Water, and Fire beats Earth.

If the chosen element wizard wins, players receive a multiplier of the stake, and a new battle takes place. This thrilling feature runs until the opponent wins.

Elysium rate the Wizardz World slot at 3/5 on their own volatility scale and it has average returns of 96%. There’s a bet range of 0.20 to 40.00 per spin, making it a game that will suit most bankrolls.

This enchanting game joins other slots from Elysium, such as Supa Crew! at some of the best casinos from 11th April.