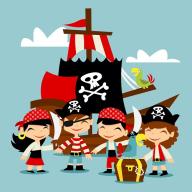 Net Entertainment has really been bringing the new titles on a regular basis this year, and they're continuing that trend with the upcoming release of Hook's Heroes. This is a video slot that's based around a bunch of kids playing pirates. It has a "2.5-D" type of visual appeal, much like the Paper Mario and Don't Starve video games, and we would be surprised if they didn't take a cue from the popularity of that graphical style in deciding on this style for the game.

The new game by NetEnt uses a 20-payline format with five reels and three rows. What you'll find is that the high symbols are based around different kids in different pirate roles, and you'll also find that the background and graphics stand out as being high-quality. The coins start at the $0.01 level like most NetEnt slots, and you'll be able to bet multiple coins per payline and increase your coin size to manipulate your total bet. This gives players a wide range of bet sizes available, and that means this game is going to be perfect for players at any level of stakes.

You'll find three key features that drive the majority of the gameplay in Hook's Heroes. These features are the Fairy Feature, the Pirate Feature and the Mermaid Feature. When one of these randomly triggers, they add wilds and other elements to the reels that give you better winning chances and a lot of value. You can also trigger free spins, and you'll get a choice between each of the three features and the number of free spins for each when this bonus round is triggered.

The thing that has kept NetEnt at the top of the online slots development world for quite a while now is that they are constantly innovating. This innovation can be seen in a major way with Hook's Heroes in the fact that they have a very particular style of graphics and three new features with a theme that we haven't really ever seen before with the children dressing up like pirates. Overall, it's really pushing the envelope like they always do, and it's just another example of how Net Entertainment is putting out high-quality titles on a regular basis.