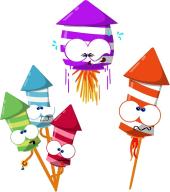 Often in the online slots world, we see situations where the big wins that get the most attention are from progressive jackpots. A player by the name of Beata from Poland was able to buck this trend with a nice upper five-figure win on the Wild Rockets video slot by Net Entertainment. This is one of Royal Panda Casino's newest editions, and it just goes to show that these new titles could pay off at any time.

Paying attention to how Beata managed her win is a lesson in solid winning streaks. She started off by getting a set of 10 free spins with a set of three scatters, and on the seventh of those spins, she picked up a $41,049 win. This win in itself was because of a whooping 12 wilds that she scored on the reels at the same time. She picked up a few thousand in other wins for a total of $45,802 from the free spins bonus feature across only 10 free spins. After she continued her regular play, she ran that up to a total of $89,712 in winnings.

The Wild Rockets online slot uses a very atypical layout, something that software developer Net Entertainment has been doing a lot lately. It has five reels with three symbols on the first and last reels, four symbols on the second and fourth reels, and five symbols on the center reel. Because you can win with a combination of a symbol on any spot on the reels in order from left-to-right or right-to-left, there are a total of 720 ways to win. You virtually double that because you can win from both ways as well.

Royal Panda Casino has really been the home of the winners lately. A player from the UK picked up $36,039 on Lucky Leprechaun recently, and another from the UK scored $60,292 on Piggy Riches. With their solid selection of video slots and their huge popularity among slots fans, it's not really all that surprising that so many players win at this online casino. If you're looking to take your shot at being their next big winner, then you'll have plenty of options to choose from to make it happen.