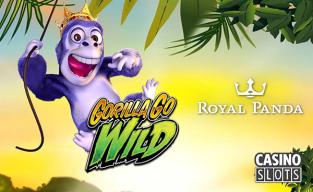 Players who are familiar with Royal Panda Casino can tell you that they turn out a lot of winners. They've done it yet again, and this time it came on the Gorilla Go Wild online slot. A lucky player was able to take down a total win worth $84,287, including a really large payout on this particular game.

How the Wins Came Together

On the most basic level, a player named Caroline was given a free chip to play some slots for being a loyal player to Royal Panda. She ended up playing for $40 per spin, and she nailed three of the temple scatter symbols in Gorilla Go Wild to bring up a bonus feature. This includes ten free spins with sticky wild symbols that include multipliers. She ended up with a total of 11 different wilds stuck on the screen (out of the 15 total symbols) for a total multiplier of 1,928x. This led to a payout of $75,037. After wins on some other games, the total payout came to just over $84,000.

What's so crazy about this win is that it came as the result of a free chip. Caroline didn't have to wager anything of her own to take down this huge payout, and that's worth pointing out because many online casinos put withdrawal maximums on free chips like this one. However, Royal Panda does not, and that's one way that they help to show their players that they really value them. It's easy to see that Caroline is happy about that, and it's not the first time something like this has happened at this online casino.

Royal Panda Casino has been running since 2014, and they use games from the Microgaming Quickfire platform in addition to those from NetEnt and a number of other providers. They have gotten great reviews since they first opened up shop, and they have gotten a ton of attention for their seemingly never-ending series of jackpot winners. Caroline is the most recent example, but she most likely won't be the last in 2016 if they continue the pace that they have set for over the past couple of years.