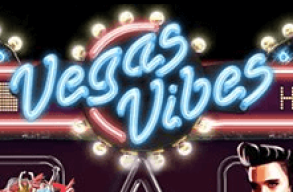 Las Vegas is primarily known for being the gambling center of the world, but it also has an extremely popular entertainment industry with tons of live shows and a history of famous performers. This entertainment side of the Sin City has been captured in a major way with the new Vegas Vibes online slot by Slotland. This game features a progressive jackpot, bonus features and all of the bright lights and excitement that you'd expect from visiting Las Vegas.

The format for Vegas Vibes is pretty standard. It uses five reels and three rows of symbols, and there are 20 paylines. This is a good number to use because it gives more excitement than titles with just a few lines, but it doesn't have so many that you can't keep up with them all while you're playing. There are five set bet sizes to choose from in this game at $1, $2, $4, $8 and $10 levels. This correlates to playing with all paylines activated and coin sizes of $0.05, $0.10, $0.20, $0.40 and $0.50 apiece, but this game doesn't use the standard coins and paylines layout.

If you play with the $10 maximum bet, then you'll pick up the linked progressive jackpot as the top prize in this game. It regularly floats anywhere from $50,000 to $150,000, so it would be a significant win for anybody's bankroll. In addition to this, there's a free spin bonus feature that triggers when you pick up three or more of the dice bonus symbol. Wins in this feature are hit with a 3x multiplier, but the wild symbols also expand to give you more chances to win multi-line payouts. It's easy to see that the bonus feature is where the majority of the value lies in this game because of this double whammy of extras.

Slotland has shown with Vegas Vibes that they're continuing to expand and offer new things. Their proprietary software gives players a selection of games that they can't find anywhere else, and it's the place to be if you want to try something new. They also have good bonuses with favorable terms and conditions instead of the endless wagering requirements that have become standard practice among some of the competition.

If you want to try the new Vegas Vibes slot, then try Slotland now.