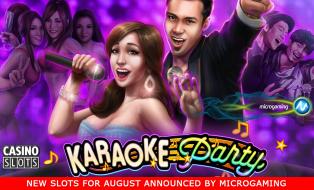 The Microgaming Quickfire platform is well known in the industry for combining games from a number of different sources. First, there are all of the most popular games from Microgaming's history in addition to all of their new releases from the past several years. On top of that, you get plenty of titles from third-party developers that have been hand curated to make sure that you're getting the best that these companies have to offer. This leads to a very aggressive release schedule, and there are a number of new titles on this platform to look out for in August.

The first new release on the list is a video slot by the name of Karaoke Party. This game uses an older format with five reels, three rows and just nine paylines, something that Microgaming uses in a throwback from time to time. This game has a set of 15 free spins waiting on you with a 3x multiplier that can be re-triggered for even more value, and wild multipliers are all over the reels.

Monkey Keno is another game showcased in August, except it's a rare new release that isn't actually a slot. This is a new version of the lottery-like keno game that's a classic in land-based casinos all over the world, and it has a more balanced pay table than most other games in the genre. You can win up to 10,000 times your bet on a single wager, which is obviously worth taking a look at.

Rabcat is one of the third-party developers that has gotten a ton of attention by showcasing its games through the Quickfire platform. The new Frozen Diamonds 20-payline video slot gives players a gameplay experience based on falling symbols instead of spinning reels, and it has an avalanche feature where winning symbols explode to get out of the way to give you chances for even more wins during the Bonus Fall round. You can get free spins from a second Bonus Fall on the same spin, and that gives you extra wild symbols and chances for even more free turns. This is obviously an action-packed title that's going to be a great addition to the platform.