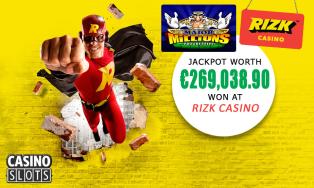 If you're the type of player who thinks it would be great to turn a relatively small deposit into a tremendous payout, then you'll love what happened to one lucky player recently at Rizk Casino. He made a simple deposit of €100 and started to play one of his favorite slots. What happened next has surprised tons of people, even industry experts who have been around for years.

In less than half an hour, this player had scored a life-changing sum of money. A win worth €269,038.90 was won on the Major Millions slot, a game produced by Microgaming. This is one of their most iconic progressive jackpots, and it's known for being one of the first big progressives to gain a lot of attention in the industry as a whole. It's a bit of a classic as far as online slots go, and this lucky win showed that it's still paying out major sums of money like it always has.

The Role of Progressive Jackpots

Historically speaking, progressive jackpot games have typically been the titles that have gotten the most attention from players. However, in recent years, they have taken a smaller and smaller percentage of the market as a whole as players seem to have gravitated more towards games with a lower volatility and smoother gameplay without the big swings that come with having a massive progressive jackpot. With that having been said, they must still have a bit of a following since we see big progressive winners like this one on a regular basis, but it's an interesting trend in the industry that's worth keeping an eye on.

Rizk Casino jumped up on the scene in early 2016 with a different type of theme than we had really ever seen before. While it does have a superhero sort of vibe to it, it's all about giving players extra ways to get paid with tons of promotions and a huge selection of games. This includes titles from Microgaming, Net Entertainment, Quickspin, Thunderkick, NextGen, Play N Go and plenty of others thanks to the Quickfire platform that brings all of these games together in one package. If you're looking to be their next big winner, you'll have plenty of opportunities to do so.