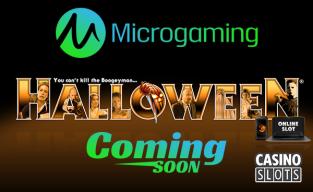 Around 40 years ago, the first Halloween film was released, and it featured Jamie Lee Curtis in what was her debut in a movie. It centers around Michael Myers, a man who killed his sister on Halloween as a child, and he comes back to his hometown to kill a bunch of people as an adult. The movie was a tremendous success and kicked off an important series of slasher-style horror movies, and it's the subject of a new licensing deal by Microgaming.

Microgaming has a history of making slots based around movies. They've done it several times before with other forms of media as well, including comic books and television shows. Some of their most popular titles have come from this formula, and this includes names like Jurassic Park and Game of Thrones. There's no doubt that they will do a great job with the upcoming Halloween slot, and we're very eager to see how they will incorporate the different characters and themes of the movie into the game itself.

What Players Can Expect

The way that this company usually handles movie-based slots is that they pack them with features that tie in themes and concepts from the movie itself. That will most likely be the direction they go with the gameplay. The graphics will probably reflect actual scenes from the movie along with shots of characters and locations from the film. We can also expect a spooky soundtrack with screams and other eerie noises. They tend to create an atmosphere that matches the mood of the movie when they base a slot around one, and that's what we expect to see here.

Microgaming was the software behind the very first online casino back in the mid-1990s, and they have been on top ever since. They have a tremendous history that spans well over two decades, and they have iconic slot releases each year. It's looking like the Halloween slot could end up being one of those, but we'll have to see what they come up for it. With their history, we're sure it's something that will get the attention of a lot of players, and now we just have to wait for a release date.