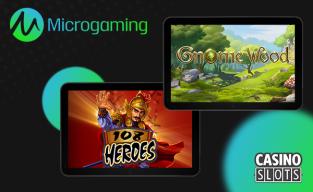 If you're a fan of new slot releases, then you'll want to pay attention to what Microgaming is doing in the month of September. They have multiple new releases that are coming out in the first week of next month, and they show a lot of promise as far as having a ton of features and giving players an exciting style of gameplay.

The first new game is 108 Heroes: Multiplier Fortune, and it's all about a group of warriors on a three-reel format title. You'll have a Chinese motif in the game along with a strong soundtrack, and you'll play through Ancient China as you try to take down some big wins thanks to the heroes from the title of the game. They act as wild multipliers and give you chances for respins with multipliers that can double your payouts for even larger prizes.

Coming on the Microgaming Quickfire platform from developer Rabcat is Gnome Wood, a 25-payline video slot that is showing a lot of promise. It's based on a woodland world with magical creatures who are there to help you get bigger and better wins. You'll see the Wandering Wilds feature in full effect in this game, some of which even have 2x multipliers to double your wins. The further you make it through this game's world, the more opportunities you get to see big payoffs, and that brings a ton of replay value to the slot as well.

Both of these games are coming to the Microgaming Quickfire platform on Wednesday, September 6, 2017. Other releases could be coming later in the month (and is very likely), but they haven't been officially announced so far. Each of these games are available from both desktop and mobile platforms thanks to their HTML5 release, and that means you can play at home or take it with you wherever you go with your smartphone or tablet. This is a great set of games to be released early next month, so make sure that you're ready to go on September 6 to get in on the action.