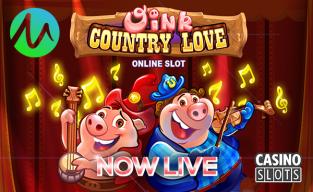 Microgaming is able to build a solid online slot out of just about any theme you could come up with, and their latest release shows that in a major way. Today on August 2, 2017, they are releasing their new Oink Country Love slot, and it's centered around a pair of pig country singers called the Oink Bros. who are trying to win the favor of Miss Southern Charm.

Willy and Chancho Take to the Stage

Willy and Chancho are the Oink Bros. band, and they're here to go after the woman of their dreams, Miss Southern Charm. This game has five reels, three rows and an atypical 45 paylines, and it features a ton of animated antics and a strong soundtrack to bring the silly theme to life. Players will have access to multiple features as well with a set of free spins coming their way thanks to the Barnyard Bash feature. You'll be able to re-trigger this feature repeatedly with a better symbol set for bigger and better prizes.

There's no doubt that this theme is a little outside of the box, but it's not like Microgaming is without a history of games that are a little goofy with their themes. One item that does come to players' attention is the 45-payline format and what that could do for bet sizes. They have handled this by basing everything on 50 coins per spin with locked-in paylines that you can't change, and that puts the minimum bet size at just $0.50 per spin.

Microgaming has been making online slots for well over 20 years, and they have a great reputation for balancing graphics and solid gameplay. What you're seeing with the Oink Country Love slot is that they're adding another game to their platform that uses a different type of theme than you've probably seen before anywhere before, and they're doing it with a set of features that will drive the gameplay in a strong way. This is a good way of building out a slot, and it's looking like something that a lot of players will enjoy. Check out your favorite Microgaming Quickfire-powered online casino to play this game because it's being released today.