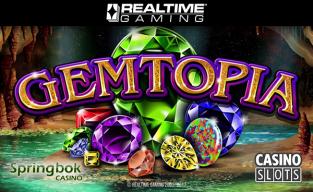 One of the things that has helped Springbok Casino to get a lot of attention over the past few years is the fact that they have a deal with Realtime Gaming where they will get most new releases first. This means that there's always a period of time with these games where this particular online casino is the only place you can enjoy the games, and then they are eventually released to other sites that use their software.

Gemtopia is the latest Realtime Gaming slot to be released at this casino along these lines.

About the Gemtopia Slot

This game uses five reels with 15 paylines in a game that visually resembles something like Bejeweled or Jewel Quest. There are lots of gems on the reels, and they give players the same type of relaxing gameplay experience that you would expect from these types of casual, gem-matching games. This gameplay is exactly what makes this such an interesting release because matching a visual theme is one thing, but matching how it makes you feel to play a game is a different level of difficulty.

In terms of features, this game has a progressive jackpot that will definitely get players interested who are looking for a big payout. On top of that, there's a wild respin feature, and players also get a chance to win free spins as well. If you get a wild anywhere on the reel, it expands, and you get an instant respin with those wilds kept right where they are sitting on the reels. Another wild can give you another respin, and so on.

Widely known as one of the most popular online casinos to operate for South Africa, this casino's deal with Realtime Gaming is one of the things that has helped them gain attention on a global scale. They offer over 150 games with plenty of slots and table games available, and they offer their bonuses, deposits and withdrawals in South African rand for the convenience of their players. This new game will be released on August 12, 2017, at Springbok Casino. This is yet another example of RTG showing that they're more geared towards high-quality games now, and it's easy to see why players are so eager to try out their newest upcoming release.