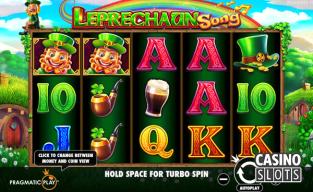 Players will be hoping that the famous luck of the Irish will be with them when they spin the reels of Leprechaun Song, a new slot game from Pragmatic Play. Games based around all things Irish are always popular and Leprechaun Song hopes to attract punters with a series of Irish-style symbols, plus some rewarding bonus features.

Find A Pot Of Gold

This 5-reel, 20-line slot sets the reels against the rolling green hills that are so popular with these types of game. A rainbow stretches across the top of the screen and there's a happy leprechaun sitting to one side. Symbols inlcude a pipe, dark beer, green top hat and the leprechaun, who pays out the top prizes when landing across a payline. The rainbow is a wild symbol which helps players to gain extra winnings, while a pot of gold is a scatter symbol.

There's a few randomly-triggered features that lead to extra rewards. Players could trigger the Raining Wilds feature, where extra wild symbols fall down onto the reels, or the Pick a Fiddle feature, where they claim an instant coin award. Giant 3x3 symbols can appear, helping to create high-value combinations, or the pot of gold can be randomly nudged onto the reels, triggering one of the  free spins rounds.

Players earn 10 free spins, with all wins doubled throughout, but before they begin, they pick mushrooms from a field to earn extra games, additional wild symbols, or multipliers. An alternative free spins feature consists of 15 games, during which coins are collected. Coins add extra spins and multipliers, while collecting enough during the games will lead to a progressive jackpot round. Players could also be awarded the Giant Symbols free games and while just 3 bonus spins play out, 3x3 symbols are on the reels for each game.

This action-packed slot is mobile optimised and comes with a return to player percentage of 96.46%. It's a medium volatility game that can be played at online casinos which feature the Pragmatic Play range from 9th August.

We are delighted to unveil our new slot game, Leprechaun Song. Its exhilarating and uplifting nature makes us confident that it will be a hit with players