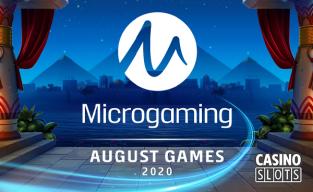 August sees the release of several new slots onto the Microgaming platform. The online and mobile comatible games include titles based on Egyptian mythology, wildlife, and ice-hockey.

These slots come from a network of independent studios supplying the Microgaming casino games platform.

3 Tiny Gods is a game from Foxium themed around Egyptian mythology. It comes with a jackpot mini game and the chance to win up to 5000x the stake with the help of the powerful gods. It's released on 25th August.

On the 11th August, Alchemy Gaming launch 2 new slots. Retro Galaxy is a space-themed game featuring Rolling Reels, high volatility and the the chance to win 7300x. Goldaur Guardians features a fantasy theme, and bonuses such as the popular Hyperspins mechanism.

North American wildlife enters online casinos on 18th August with the Wolf Howl slot from Just For The Win. Wild wolf symbol can unleash huge multipliers to create wins of 25,000x the bet.

Break Away Lucky Wilds is the ice hockey-themed follow up to a popular slot from Stromcraft Studios. It adds 3 jackpots, and 3 different free games rounds with multiplier trails to the mix and comes out on 20th August.

Other games set to join the Microgaming platform this month include Ancient Warriors from Crazy Tooth Studio, Lil Devil, from Big Time Gaming, and 243 Crystal Fruits Reversed from Tom Horn Gaming. In all, over 50 new titles are due for release, making August a busy month for Microgaming.

On top of this huge schedule of new slots, Microgaming will be hosting a range of tournaments to give players a chance to experience these games in competition with others.