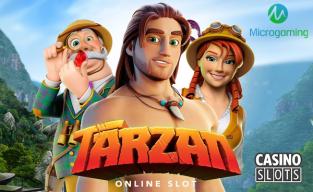 Tarzan is one of the most well known and icon stories of all time, based on a novel that was first published back in 1912. Microgaming has done its part to keep this story alive over a century later with its most recent release: the Tarzan online slot. This game has been released on both Quickfire and Viper, so players at any Microgaming-powered online casino can log in and play now.

Details on This Title

This game uses 40 paylines, which is the first thing that many players will want to know since that largely dictates the pace of the slot as a whole. The graphics are based on rendered visuals that give players a great background behind the reels. You'll also see Tarzan himself swinging around, helping players to celebrate winning spins and generally cheering you own. You'll hear his trademark yell, and everything has been designed to focus on this one character, his story and the characters that make up that story.

There are tons of features in this game. The first thing to know is that it uses the Rolling Reels feature in the free spins bonus round, and this gives players chances to win multiple times on each spin as winning symbols fall away to allow new symbols to fall into place. Growing Wilds show up in the free spins as well to give players more ways to win, and there's a jackpot as well. There's a lot to get excited about in this game because there are a lot of different ways to win big.

Winding Down 2016 for Microgaming

Microgaming has released some pretty impressive games this year, and it's cool to see them end on an atypical note, especially since you normally see more holiday-themed releases this time of year. The Tarzan slot was announced a while back, and it was released this December with a lot of players eager to get in on the action. It's fun to see them using brands that aren't necessarily their own but also aren't necessarily the "latest" popular thing out there. They're able to produce extremely high-quality titles, and Tarzan is a brand that will continue to last a long time from now.