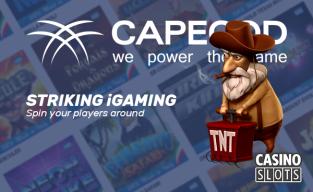 Italian casino games developer Capecod are ending 2017 in style. It's already been a busy year for them, but with a grand total of eight new slots just released, they show no signs of slowing down.

Themed around Mayan civilisation, alien abductions, Albert Einstein and the Day of the Dead celebrations among others, each game comes with their own unique bonus rounds to keep players entertained up to and beyond the holiday season.

So, let's get straight into the festive spirit and take a look at each of these new games that will be landing at online casinos anytime now.

An Overview of Capecods' Newest Slots

Mayan Adventure is set within an ancient temple, where three bonus features are waiting to be discovered. Players are offered a chance to uncover hidden treasures, or hunt around for mystery symbols that can shower them with gold coins. Stunning graphics bring this long-lost civilisation back to life.

There's something strange going on in New Mexico as the Roswell Secrets slot reveals that aliens are among us. This fun slot machine also reveals free spins, random wild symbols, stacked wilds and win multipliers that can help players abduct some big wins from the casino.

Conquistadors takes us on an adventure through the South American jungles in search of hidden treasures. Players get to follow a treasure map that can uncover precious riches, while a mysterious box provides futher clues to the whereabouts of gold coins that are found along the journey.

The spectacular Day of the Dead celebrations are the topic of Calaveras, where elaborate costumes and colour fill the reels. It's a low volatility game, where players will see lots of winning spins as symbols line up across 25 paylines, giving them reasons to celebrate thoughout the holidays.

We're off to the Sahara Desert next, with Taureg, a slot game that invites players to enjoy a Moroccan tea ceremony, or even welcomes them to a tent where they can collect bonus prizes. It's an exotic-looking game that will bring warmth even to the coldest winter days.

A cartoon Einstein is the star of Genius, where the famous scientist and his glamourous assistant help players to unlock the secrets of the atom, leading to explosions of coins. Other fun experiments can result in new prize discoveries in this great-looking game.

Bomber Fruit is a slot game where the title says it all. Fruit symbols are joined by exploding bombs across the 25 paylines, blasting open 3 seperate bonus rounds and rewarding players with some juicy payouts. It's a game that will appeal to fans of classic fruit machines, along with anyone who likes plenty of extra features.

Last but not least, we have The Musketeers, which is based on the famous tales of heroic French adventurers. They are seeking the Queen's stolen diamonds, and players get to enjoy 3 bonus rounds as they try to win back the favours of Her Highness, helped by expanding wilds.