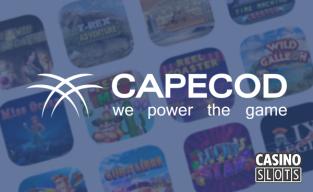 Italian casino games developer Capecod Gaming has revealed a total of 12 new slots for the online and mobile markets, with each game carrying a rich array of features, rewards and unique styles. Although some of these have been created in-house, others are co-developed with suppliers such as Elsy Admiral and Bakoo.

Slots From Across Time

The games each have thier own themes and cover topics as far apart in time as dinosaurs and outer space adventures. There's even one called Time Machine Creator, which sees a cartoon style scientist and his latest invention awarding free spins across the ages. There's an expanding wild knight symbol waitng in the 1338 free games, while the Red Baron wild symbol will randomly appear in the 1915 round and a sparkling glitterball lights up the bonus games in the disco-themed 1977 free spins feature.

Other in-house created slots inlcude Tex Mex, where high-paying pinatas and castanets are joined by hot chillies that heat things up when they award up to 20 free games, with the chance for bigger wins from special chilli symbols throughout the round. There's also a side game that has worms crawling out of Tequila bottles for some tasty rewards. Capecod Gaming have also developed the undersea-themed Miss Ocean game, while a trip to the funfair is waiting in the Reel Coaster slot, which should provide plenty of adrenaline thrills to players.

The games produced in collaboration with Elsy Admiral are all set in ancient times, from the Jurrasic era of T-Rex Adventure, to the mysteries of Egypt in Pyramid Escape and the Roman adventures of IX Legio. Players can also explore the Seven Wonders, where the Hanging Gardens of Babylon, Lighthouse of Alexandria and Collosus of Rhodes pay out prizes. Two wild symbols and unique scatter symbols trigger extra win-lines or features, with players awarded Magic Spins, bonus treasure chests or jars that can reveal big wins.

Four more slots have been co-developed with Bakoo, and these include the pirate-themed Wild Galleon and the classic fruit machine style of Lucky Stars. Cuba Libre has more exotic fruits, classic cars and Cuban cigars on the 5 reels, while the Cuban flag is a wild symbol and the game logo triggers random bonuses such as free spins or multipliers. A mystery symbol can double or triple wins in this attractive game. We head to the stars in Space Mission, which sees a brave hero and his pink-haired co-pilot joined by the spaceship wild symbol and 3 bonus rounds that can blast winnings into orbit.

These desktop and mobile-compatible slots are now available at casinos which feature the rapidly-expanding Capecod Gaming collection.