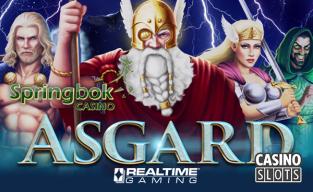 Because of the deal they have with Realtime Gaming, new slots by this software company are released at Springbok Casino before they are released anywhere else. This is what's happening on December 13, 2017, when the newest online slot by RTG is released, which is Asgard, a game based around Norse mythology that includes popular characters from the Marvel Cinematic Universe like Thor, Loki and Odin.

This is a 243-ways format game with five reels and three rows, so the action is intense from the actual foundation of the slot. There are nine different worlds in Norse mythology that you will find in this game, including the home world of the three characters mentioned earlier Asgard, which is where the name of the slot comes from. It's completely full of features, which includes chances to get free spins with extra wilds or free spins with a 3x multiplier. It's clear that there are lots of ways to get bonus features in this game, which only adds to the action.

The way that modern video slot gameplay normally works, especially regarding features, is that you have to hit some difficult combination (often scatters) to trigger a feature, and this may only happen once every three or four sessions depending on the game and how much you play at one time. With the Asgard slot, however, you have a real chance to trigger a feature on every single spin with the Thunderbolt feature. When this hits, you'll be able to pick up random reels that are made completely wild for more payouts and chances to win.

Realtime Gaming has had a pretty good year, and they're obviously closing out 2017 on a strong note with this release. They already have plans for 2018 that they have announced as well, and that includes two game releases coming in January with Shanghai Lights and Fu Chi. Both of these have Asian-inspired themes, as you can tell by the names, and they look like they'll have strong graphics and gameplay.

Press Release, Springbok Casino Players to Do Battle With the Gods businesswire.com, November 28, 2017