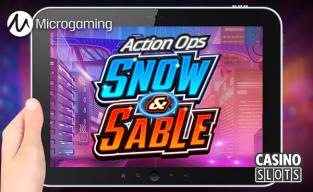 Action Ops: Snow and Sable is a new slot game where a crime-fighting duo in the futuristic Aurora City battle over 5 reels to award players with a range of exciting bonus features. It's been developed by Triple Edge Studios, exclusively for the Microgaming network.

This 10 payline game has playing card symbols to pay out the smaller prizes and items such as flying cars and strange robots to return the top awards. But Snow and Sable are the characters to look out for.

These women are wild symbols, who help to complete extra win-lines, while providing individual amd mixed payouts. If 3, 4, or 5 game logo scatter symbols appear, players enter a high-paying bonus round where 10, 15, or 20 free spins will play out. During each free spins, Snow and Sable will be randomly assigned to reels 1 or 5, turning whole reels wild. If players get the same character on both, the chances of landing big wins is greatly increased.

Extra spins can be awarded when the logo appears again at any point in the free games. This is a high-volatility slot game that offers wins of up to 1,000x the total stake.

This exciting slot machine is now available at online and mobile casino sites that use the Microgaming software platform.