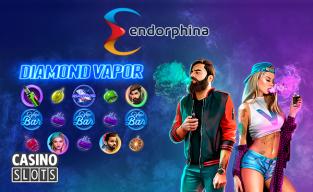 Endorphina’s world exclusive slot, Diamond Vapor, is the first time we’ve seen this theme grace the reels of a slot. The game is a collab between the provider and a US/internet based seller of vaping related paraphernalia. Sound like an unlikely partnership? We thought so too and while not yet available for real money, we were curious to know more about the relationship between an online game developer and Keith, the owner of the online store.

1. This is definitely an interesting partnership, so please tell us how your relationship with an online game developer began.

I dont believe that vaping is just trendy, I believe there are benefits to it saving lives from people who smoke cigarettes. It is a healthier alternative.

Keith - owner of the store

I have a good friend out of the Ukraine that works with Endorphina already, and he thought it would be a great idea to release a vape slot machine.

2. Where did the concept of the Diamond Vapor slot and the prize structure come from?

3. Did you have influence over the development of the game?

Not really, they knew the basic idea of what should be included in a vape slot machine.

4. How does it feel to be the basis for the world’s first vape-themed slot and do you hope to see it released for real money play?

It is a great feeling to be the first of its kind, my hopes and dreams is that at one point it will become a cash slot machine. Only time will tell.

5. Apart from the custom Endorphina vape juice, what additional prizes do participants stand to win?

They will have a chance to win gift certificates from my website diamond-vapor.com  and one grand prize winner , I will personally take out to dinner.

6.  We noticed the World Series of Vaping in Moscow banner on your site. What happens at an event like that and why do you think vaping has become such a trendy thing to do?

The World Series of Vaping is another one of my companies that is an event that is held at different conventions all over the world and is based on a cloud blowing contest. I dont believe that vaping is just trendy, I believe there are benefits to it saving lives from people who smoke cigarettes. It is a healthier alternative.

7.  Where are you located and have you noticed an influx in sales since the launched of this promotion?

I am based out of Hollywood, Florida USA, I have noticed an increase in activity on my website, but it was not done for that reason, it was done to combine two of my greatest passions, vaping and slot machines.

8.  Just for fun, how did you get into vaping? What’s your best-selling e-liquid and do you have a personal favorite?

I started vaping over 5 years ago, when it got real big in the USA, My best selling eliquid is "Nora's Dream" by Aisle 7 (one of my brands) I created the line for a little 2 year old that suffers from cystic fibrosis and her mom is a single mom, we help pay the medical with all the bottles sold. It has won awards all over the world. I really dont have a favorite eliquid, there are so many to choose from, I have a constant rotation in my tanks.