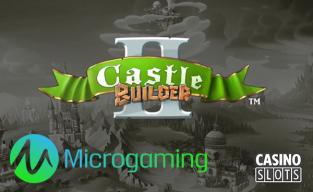 The Castle Builder online slot was produced a few years ago by Rabcat, and it was distributed through the super popular Microgaming Quickfire platform. This game incorporated a number of elements that haven't been seen much in the online slot world, and that gave it a lot of replay value. The sequel to this game has been announced at ICE by Microgaming and Rabcat, and it's packed with even more features.

Customization is something that you don't find much of when it comes to online slots, but you'll find plenty of it when you play the Castle Builder II online slot. You start by picking one of three avatar characters to play as, and each of them has their own story that unfolds as you accumulate pieces and build your castles. Each of the three characters you can choose from has a different feature set, and there are 15 different kingdoms available for exploration on top of 75 different castles that you can build and more than 300 characters that you will run into on your adventure.

Along with this feature-rich environment comes a number of options for social interaction. This includes an in-depth achievement system that gives players lots to get excited about because of the different things they can win as they make progress through the game's storylines. It's definitely atypical to have this much depth in an online slot, and it's this type of innovation that has made Microgaming and Rabcat's content distribution deal such a huge success.

An exact release date hasn't been announced yet, but it has been announced that this new game will be released in the second quarter of 2017. This means that it's still a few months away, but it's looking like it could be a particularly anticipated title. Microgaming has definitely changed the shape of the playing field with Quickfire, and having games like those from Rabcat helps them tremendously when it comes to making this one of the top platforms in the entire industry. Overall, we look forward to seeing this game released.