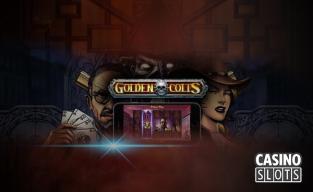 There's a dead sheriff on the loose and players will need to join bounty hunters tracking him down in Play'n GO's brand new Golden Colts slot machine. Developed in partnership with Mr Green Casino, this unique game takes the classic wild western theme and adds some supernatural elements to it, while players will find multiple bonus features on their journey to re-capture the deadly Colts.

It's a 5-reel, 40-payline game which is optimised for both desktop and mobile play. Symbols include a wild bull that substitutes for others and completeS extra winning combos, plus a colt box, decorated with skulls, that randomly triggers any of seven bonus features when it turns up in any 3 or more positions at once.

There's the Wild Bull feature, that sees additional wilds scattered across the game, a Most Wanted round where players click on posters to reveal bonus rewards, while giant-sized 4x4 symbols can land in the Ace High Gang feature. There's also the Gunslinger free spins multiplier that can boost winnings by up to 30x.

Golden Colts has been co-developed by Play'n GO and Mr Green, in what both parties hope will be the first of a number of collaborative ventures. Each side brought thier own expertise to Golden Colts, with Play'n GO delivering the exciting visuals and gameplay, while Mr Green have developed the game to match what their players are looking for.

As part of our drive to provide operators with the best games and service on the market, it made perfect sense for us to commit to a collaborative design process for Golden Colts with Mr Green. Using their different perspective and knowledge of the cus