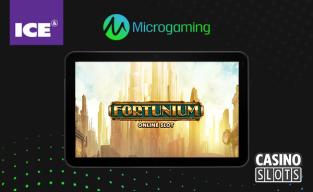 Microgaming has really swung for the fences this year at the International Casino Expo, and all eyes have been on them for their upcoming release Fortunium. They showed the debut of this game on the second day of ICE this year, and they did it in grand fashion. Their entire area was changed into a steampunk theme to match the theme of the game along with copper gears and more.

If you want people to pay attention to what you're telling them, then give them ice cream. It's hard to argue with that approach, but that's exactly what they did with a special steampunk-themed ice cream buggy. People were able to pick up a salted caramel whiskey ice cream or a gin and tonic sorbet at this buggy, two special inventions just for the show, and it all fits the steampunk theme extremely well. It's clear to see that they went above and beyond the call of duty with their presentation this year, as they typically do.

Details Released About the Fortunium Slot

With its reveal, we learned quite a few things about this upcoming release. First, we learned that it has a special Win Booster feature that's designed to work as a sort of shifting multiplier that can give you extra pays. Mystery Reels and Stacked Mystery Symbols that all change to turn into the same random symbol appear to show up in this game as well, and that's something that can lead to a lot of multi-line payouts by design. Overall, it's definitely looking like this steampunk slot adventure is designed for a lot of wins and a fast-paced style of play.

Other than this new game, players are also wondering what else Microgaming has in store for this year. They released a few ideas, but the slot releases are always what gets the most attention, and they usually have one game that they focus on during the International Casino Expo to maximize their marketing. The Fortunium slot appears to be it, and so everything was mostly centered around making a big splash with the presentation, the ice cream buggy and everything else.