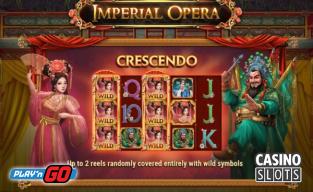 The new slot games just keep on coming from Play'n GO, and just a few short weeks' after the release of Planet Fortune and Gold King, we have yet another game from them, with the Imperial Opera slot taking spinners to an Oriental theatre filled with colour, movement and of course, bonus features.

A Night At An Oriental Opera

The spinning of the 5 reels is accompanied by a soothing operatic soundtack, and players will be soothed by the prospect of collecting wins as matching symbols stop across any of the 20 paylines and when they trigger bonus features. All symbols are richly decorated to complement the ornate setting, and while playing card icons will create the lower-value combinations, the game also features four Opera singers who will return the top prizes.

A Princess is a wild symbol who will complete extra lines for players and there are randomly-awarded treats such as the Crescendo wild reels, Harmony reels that lock together with the same symbols on each, while the Showcase feature sees stacked symbols on the reels, and each character can become a Mega Symbol, appearing in a 3x3 block to potentially create 4 of a kind winlines.

That's not the only rewards in store for players, as a golden gong scatter symbol launches free spins when it turns up. This is another Mega Symbol that will fill all of the middle 3 reels and during the bonus games, the Harmony feature will apply to these reels as well, ensuring that players have plenty of wins to sing about.

A standing ovation is deserved for Play'n GO, as so far this year, they are releasing new games at an impressive rate.

It's a high-volatility slot game that can be played from just 0.20 per spin up to 100.00 at online and mobile casinos where games from the popular Play'n GO company are featured.

Based in Sweden Play'n GO has been developing varied slots since 2005, gaining a reputation for innovative gameplay and reliability across their range. As well as slots, Play'n GO offers multiple Blackjack games, Poker and Baccarat, along with Video Pokers and scratchcards.

2018 looks like being another landmark year for the company, and Imperial Opera is another example of the high-quality games that they have become known for.