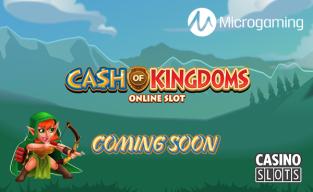 Microgaming has proved once again that they can provide innovative slot games, announcing their Cash of Kingdom slot which will introduce players to unique Invading Wilds when it is released later on this year.

About Cash of Kingdoms

The reveal was made on day 3 of the ICE Totally Gaming event in London on 8th February, where Microgaming had decorated their bar with suits of armour, archery targets, gunpowder kegs and various other items that highlighted the medieval fantasy theme that's going to been seen in Cash of Kingdoms. A contortionist entertained the crowds at the Microgaimng bar, dressed in an archers outfit and performig to the soundtrack that's going to accompany this new game.

It's still a few months from actual release, so specific details are scant, but we know that it's a 5 reel, 15 payline slot game, where colourful characters such as a knight, archer, bombardier and mage will take players on an adventure through some rich bonus features. These will include the brand new Invading Wilds bonus, where flamiing arrows will rain down on to the reels, bringing extra winnings to players.

This mobile-optimised game is designed for adventure-seekers everywhere and promises to be an action packed slot with high returns to players.

Combining an exciting feature set with a popular theme that appeals to many mobile gamers, we anticipate Cash of Kingdoms to be a long-term player favourite. It’s the perfect adventure to add to our diverse games roadmap for 2018